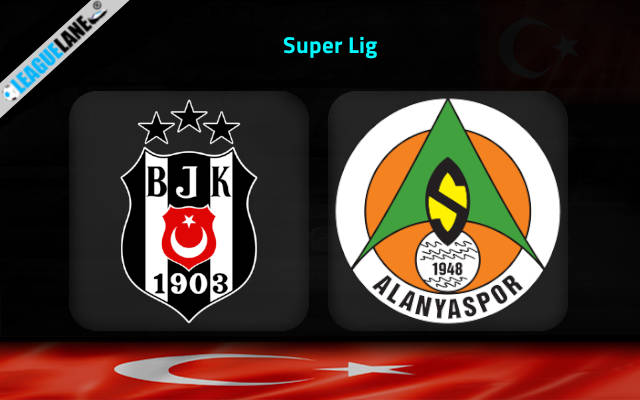 Besiktas vs Alanyaspor Predictions and Free Tips from our expert tipsters when the teams go head-to-head in Turkish Super Lig on Friday, 27 January 2023.

Besiktas are in possession of the fourth spot in the table, even while having a game in hand. And they will be determined to close the distance with the third-placed Basaksehir, who a have a lead of just two points.

Meanwhile, Alanyaspor have absolutely been the worst team on the road in the entire Turkish top flight. They conceded the most number of goals on the road, and have a single win to their name all through the campaign.

Besiktas won nine of the past thirteen h2h clashes, and have been unbeaten in the last two years. Importantly, they have a 100% winning record at this stadium in the past decade, and scored two or more goals in all but one fixture at this venue.

Who will win the match between Besiktas and Alanyaspor?

Besiktas won every single h2h meeting at this venue in the past decade, while Alanyaspor have been the worst team on the road this season in the Turkish Super Lig. And this sole victory came back in the first week of August.

On top of that, Besiktas have a 100% unbeaten record at home this season in all competitions, barring a fixture against titans Basaksehir.

All of these surely suggest that Besiktas are on a course to post the three points on the board.

Only three teams scored more at home than Besiktas this season in the Super Lig, and they also scored two or more goals in all but one h2h clash at this ground in the past decade.

Meanwhile, Alanyaspor let in the most number of goals on the road in the league, and they let in 19 goals from their past seven road trips combined.

It appears that chances are quite high for this encounter to turn into a high-scoring affair.

Besiktas have just two clean sheets to their name since the first week of October, while Alanyaspor failed to find the back of the net not once on the road in the same period. With the guests desperate to put an end to their dismal run, chances of the home team keeping a clean sheet is quite low.

Besiktas won nine of the past thirteen h2h clashes, and at this venue they have a 100% winning record this past decade in such fixtures. They also have a 100% unbeaten record at home this season, barring their encounter against Basaksehir.

Meanwhile, Alanyaspor have a totally winless record on the road in 2022-23, disregarding a single victory back in August.

As such, it looks as if Besiktas have got this in the bag. A win for them is placed at an odd 1.67.

Coming to goals, majority of h2h clashes have been high-scoring affairs. The last six h2h encounters had 22 goals between them, while the last seven games of Alanyaspor had 30 goals combined.

Either team has not been performing well as far as their defenses are concerned, and this makes the Over 3.5 Match Goals a great pick for the day. The odds for the same are placed at 2.30.