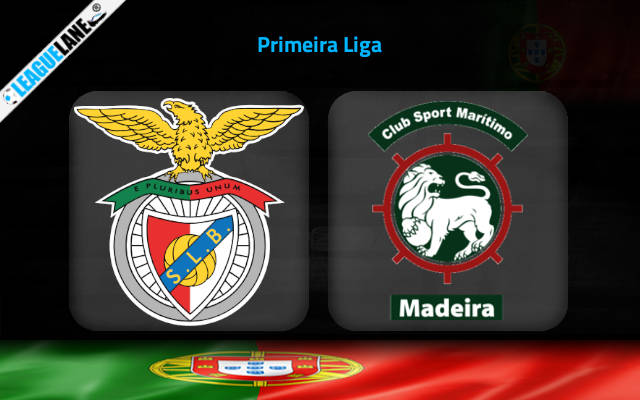 Maritimo head to Estadio da Luz on Sunday for the Liga Portugal tie with hosts Benfica.

Benfica have been one of the top performing teams in the Portuguese top flight for several years. The previous season was no different. But, they had missed out on a European ticket by small margin of points.

Hence, they are seen playing a set of Champions League qualification fixtures and a set of the new Liga Portugal season outings lately. Whatever the stage is, they seals all green and are currently on the back of 17 straight win across competitions.

Going on, Benfica seems to be determined to make amends this time. The team bagged a total of 18 points in their 6 league fixtures in this season with a perfect score of 6 wins.

Do also note that the teams scored a total of 14 goals while leaking just 3. German coach Schimdt can be thrilled with his team’s performance in both the scoring and preventing sides.

Meanwhile, Maritimo were one of the teams that had to settle outside the top half at the end of the past. They looks much weaker this time, losing all the previous 6 fixture in this campaign.

It is worth mentioning that they had allowed a total of 10 goals in the previous 4 league fixtures while scoring just 2 in the process.