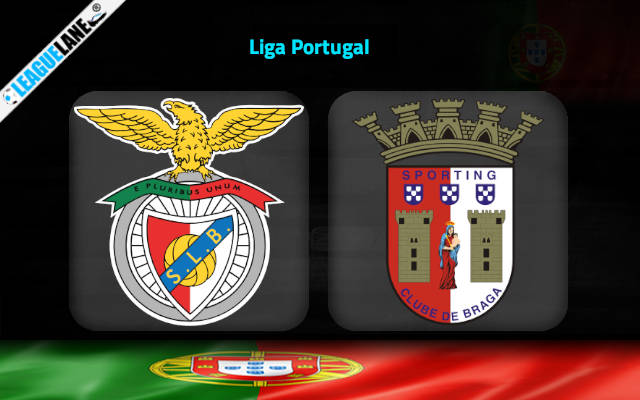 This will be an interesting game as 3rd place takes on 4th late on Sunday.

Benfica are in 3rd place and have 25 points and they are only one point behind the league leaders. From 10 games played they only have one defeat and have won 80% of their games so far.

However even though Benfica have had a fantastic start to the season recent form has not been great for them with 1 win in their last three games. Their last match finished in a 1-1 draw against Estoril and at home they have 3 wins but also one defeat. That loss came in their last match and it was a surprise one as they went down 1-0 against Portimonense who are currently in 6th position.

Sporting Braga are in 4th place and one position behind however there is a six point gap, so this is a big game for the club who would really lose distance on Benfica if they were not to win the game, though a draw would do too.

Braga are in good form with no defeats in their last five games and have won their last two in a row. What is interesting is that they are currently unbeaten away from home and from 5 games they can boast a record of 3 wins and 2 draws.

Benfica are the odds on favourites to win this game but we have to wonder if the real value is with Braga?

True Benfica have been solid this season and are looking like title challengers, but Braga have recorded many good wins over Benfica and we will back them to win this game. There is risk involved of course but they are a fantastic price and should be taken on.

This has the elements of being a tense but open game so we are expecting goals and of course history suggests there will be so let’s go for that too.