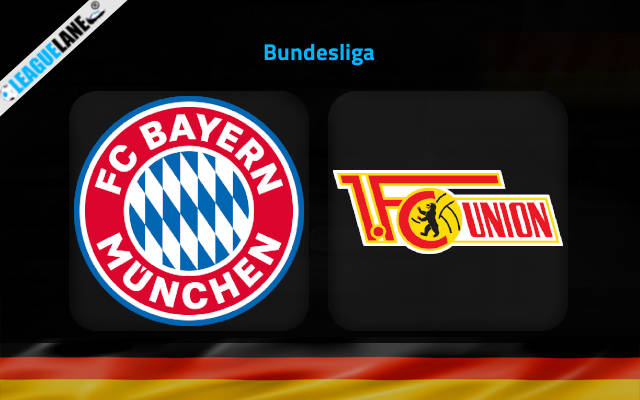 Bayern Munich will be looking to return to winning was after back-to-back 1-1 draws to Bayer Leverkusen and Hoffenheim in the previous two Bundesliga rounds.

They still have a safe distance from second-placed Borussia Dortmund at the top of the standings but head coach Julian Nagelsmann could get into problems with a potential third successive slip-up.

This is why we can expect a very strong and serious approach form the Bavarian giants on Saturday afternoon when they host Union Berlin in the last game of the day at Allianz Arena.

Union Berlin lost touch with the top teams in the division after a streak of four defeats in the last six Bundesliga rounds.

They dropped the lead in a 1-1 draw to relegation-threatened Stuttgart last weekend in the capital, conceding a 90th-minute equalizer on the occasion.

The team led by Swiss manager Urs Fischer failed to find the net in three straight away outings in the league. It is a poor run indeed if we know they have played the likes of Augsburg, Arminia Bielefeld, and Wolfsburg along the way.

Knowing how motivated Bayern Munich will be on Saturday, we are afraid the visitors might experience a genuine disaster at Allianz Arena.

Both teams also scored in each of the last five home matches Bayern Munich played across competitions. However, since Union Berlin have been struggling for goals on the road lately, we will not back them to find the net on Saturday in Munich.

Instead, we will go with a comprehensive victory for the hosts and back Bayern Munich to beat Union Berlin by at least three goals difference as the main betting option at the odds of 2.15.