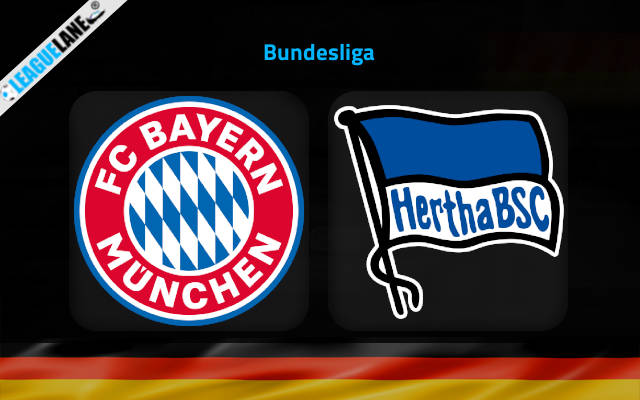 The Bavarians head into this game as clear giants and they will attempt to pick up speed in their conquest for yet another Bundesliga title against Berlin on Saturday evening at the iconic Allianz Arena.

Bayern head into this fixture after hunting down a spirited FC Koln side 3-2 after goals from Robert Lewandowski and Gnabry who scored twice, sealed a victory over the Billy Goats.

Consequently, Bayern come into this game after thrashing Bremer SV 12-0 in the DFB-Pokal Cup which saw Choupo-Moting score 4 times along with Jamal Musiala who scored twice in that game.

Jan-Luca Warm, Malik Tillman, Leroy Sane, Michea Cuisance, Bouna Sarr and Corentin Tolisso all got on the scoresheet as well.

There is no doubt, that with these many goals stacked under the players belts, there is no doubt that Bayern will play at their best against Hertha especially when they currently sit in 4th position in the league table as they will be looking for a comprehensive win over their opponents.

Hertha on the other hand, need to hope for a miracle in this fixture especially as they are currently languishing right at the bottom of the table with 2 losses in 2 games which has seen them with no points on board.

The away side come on the back of a 2-1 loss against Wolfsburg in which they showed some fight and character, but it was just not enough to see them get over the finishing line with a point in the bag at the least.

Hertha took the lead against Wolfsburg in the 60th minute with a penalty as Dodi Lukebakio found the net, but a comeback from the Wolves stole the points from Hertha.

The away side also lost their first game of the season against Koln in a 3-1 score line as Stevan Jovetic scored in the 5th minute of the game, but an inspired Koln side took the game away from the Old Lady.

Bayern are expected to win this game comfortably according to the bookmakers and we see very less value in going for a straight Bayern win at full time.

We have other tips to provide starting off with Goals above 4.5 with the odds stacked at 2.5. Bayern have just found their rhythm in the nick of time as they need to raise the bar and register victories to climb up the ladder and with Hertha Berlin struggling to get points on the board, we can see Bayern going on a riot in front of goal.

On the other hand, we back Lewandowski to get on the scoresheet in the second half of the game where there is really good value as the odds are placed at 2.62.