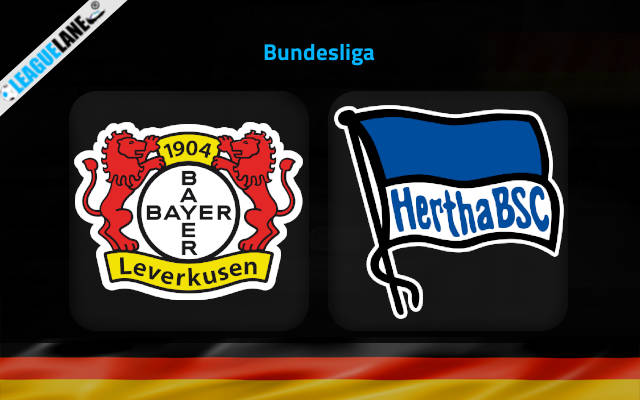 Leverkusen have been the best team in the German top flight this season, after the two titans. As expected, they are placed third in the table, and with just seven match-days remaining, they do have a shot to secure a podium finish.

They have had one of the best offenses in the Bundesliga in 2021-22, and they have also been on a good stretch of performances at home.

Meanwhile, Hertha are one of the worst in the league, and they are placed in the relegation zone at the moment. They have been on a long losing streak lately, and particularly on the road, they have been a mess this season.

They have conceded in plenty all through this campaign, and they also have a poor h2h record against this rival at this venue over the years.

For the reasons, expect a win for Bayer Leverkusen this Thursday at the BayArena.

Leverkusen recorded a 0-2 win on the road the last match-day, against Wolfsburg. They had also won three of their past five appearances at home, and had also won seven of their former eleven fixtures at this venue.

On the other hand, Hertha did win 3-0 at home the past game week, against Hoffenheim. But they were on a five-fixture losing streak before that, and they were also winless in 10 of their past 11 matches.

Going on, they also have a poor h2h record against this rival at this venue over the years.

For the reasons, expect a winning performance from Bayer Leverkusen this Thursday at home.