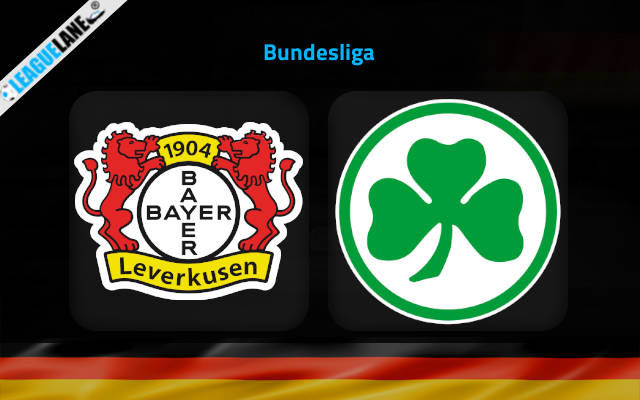 Greuther Furth will travel to the BayArena as they face Bayer Leverkusen this Saturday afternoon. Read our Preview, Predictions, and Betting Tips with Analysis here.

Bayer Leverkusen will head into the match hoping to seal all 3 points with ease as they look to close in on the league leaders Munich. Greuther Furth on the other hand has totally looked out of place in their second stint in the Bundesliga.

These clubs met twice in the 2012/13 Bundesliga season. Furth held the game to a stalemate at home. They lost on the road with a 2-0 score line.

Despite racking up enough points to stay within the top 3 in the league table, the losses for Leverkusen have been demoralising. To further add to the fact all 3 of their losses have come at home. Firstly they lost against Dortmund 3-4, followed by 0-5 and 0-2 losses against Munich and Wolfsburg respectively.

They are currently 3rd in the table, 7 points behind Bayern. As in the case of the Europa League, they are on top of their group undefeated in the first 5 games, three points clear of Real Betis.

To say that Fürth has had a disastrous season is an understatement. The team has had nothing going their way, having conceded the most goals and scoring the second fewest goals in the league.

This has resulted in them taking just one point in the league, which came against another team in the relegation zone, Arminia Bielefeld at home. Consequently, they are sitting rock bottom in the league 12 points behind safety.

The Company’s Eleven has had the lead in the first half in all but one of the matches where they registered a win this season. They are likely to win both halves.

The hosts have scored 3 or more goals in 6 of their last 7 wins across all competitions. Therefore they are certain to score a lot. On the other hand, the visitors might get a goal for themselves as they scored in 4 of their last 5 games. In short, expect a goal-fest.