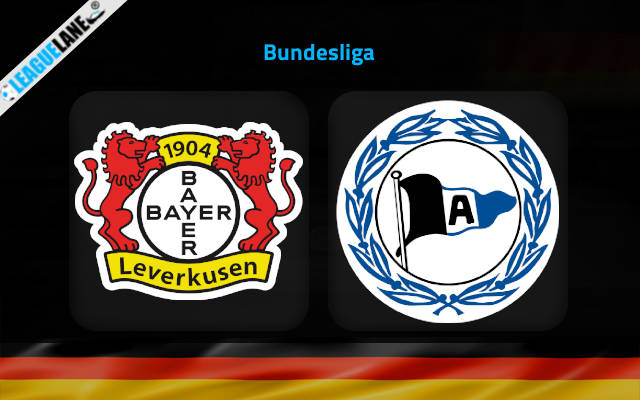 Bayer Leverkusen and Arminia Bielefeld have played in diametrically opposite football styles in this term of Bundesliga.

While Bayer Leverkusen have been scoring and conceding goals for fun so far in the season, Bielefeld relied heavily on their defensive line in search for results.

These two outfits are set to come across each other on Saturday afternoon in the 24th round of Bundesliga.

The hosts will be hoping to return to winning ways right after a 3-2 defeat at Mainz in the previous Gameweek.

Bayer had the lead on two separate occasions at MEWA Arena, but shipped two late goals to eventually lose the affair.

Gerardo Seoane’s men are now eight points below second-placed Borussia Dortmund and just four points above three different teams (RB Leipzig, Hoffenheim, and Freiburg) in the battle for the top-four finish and a place in the UEFA Champions League next season.

Arminia Bielefeld, on the other side, managed a huge 1-0 win over Union Berlin last weekend to go three points clear off Augsburg in the relegation playoffs spot.

The team led by Frank Kramer lost only one of the last eight league outings, mainly rely on their stern defensive line in the process.

The visitors could easily maintain this fine attacking form on travels here at BayArena against attacking-minded Bayer who leave plenty of room behind.

All of the last nine matches Bayer Leverkusen played across competitions saw the Over 2.5 goals FT & Both Teams To Score option coming in. All of their previous four league outings provided at least five goals.

Since Bielefeld were well capable of scoring on travels recently, we are very much tempted by the 2.75 odds offered for the Home Win & Both Teams To Score bet here.