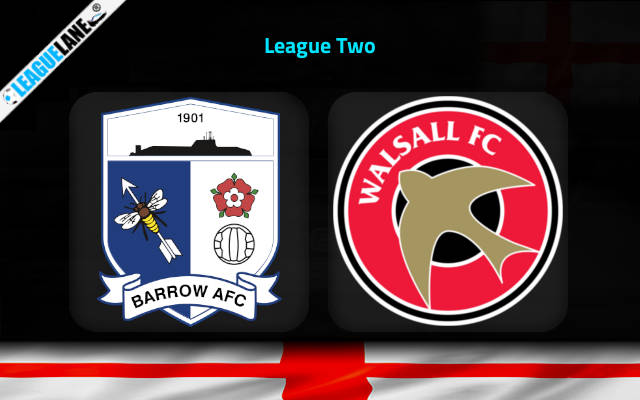 In game week 35 of League Two, Barrow plays against Walsall in their next match on Saturday at Barrow in Furness.

Barrow has added yet another loss to their tally after their last match against Bristol Rovers. Bristol scored the one and only goal in the match and maintained their lead until the end of the 90.

Walsall had no intention of losing in their last match against Northampton Town. Walsall evened the scoreboard at the start of the second half itself. Both teams couldn’t score again, ending the match in a draw with 1-1 FT score.

Barrow has played poorly in their matches, earning their position as the third team from the bottom of the league, just a single point away from the first team on relegation zone. The team has got only 32 points from their matches so far.

Both teams are in the same position when it comes to their performances in the matches. However, recent matches show Walsall has improved, which got them the three wins in the last five matches. Barrow is winless in the last five consecutive matches and will need a win if they wish to avoid the relegation zone. They have scored most of their goals in the first half as well.

Even Barrow’s home matches have not been as productive as they had hoped it would. They are winless in their last seven home matches. Walsall’s away matches also have similar results. However, they have more wins than Barrow on their road trips.

So, looking at the records, the match is most likely to end in a win for Walsall. Barrow has not scored in the last three matches and will hope to score in this match, making it likely for both teams to score.