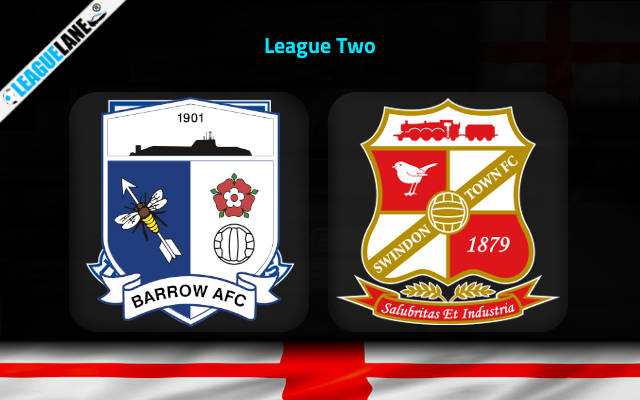 Barrow vs Swindon Predictions and Free Tips from our expert tipsters when the teams go head-to-head in League Two on Saturday, 17 December 2022.

Swindon are now out of the title race following their abysmal form since late October. The team led by Scott Lindsey are now on a four-game winless run. In their last league outing, they had to settle for a goalless draw against AFC Wimbledon.

At the same time, Barrow are slowly losing their winning touch. As they are losing every alternate game since their victory over Colchester. They conceded a heavy 5-0 defeat in their last league outing against Stevenage.

Both these teams last clashed back in April this year, and the visitors won that game by 2-1. This will be the first time both teams will play at Holker Street this year.

It is important to mention that Swindon are winless in four of their last six away fixtures.

Who will win the match between Barrow vs Swindon

We are backing Barrow to win this fixture. They have been consistent all season, winning more than half of their fixtures.

The visitors have not scored any goals since late November. Even in front of their home crowd, they are struggling to find the back of the net.

At the same time, the host scored two goals when these two sides met back in 2021.

It is unlikely that both teams will find the back of the net. The last time the visitors scored a goal was against Tranmere which was more than a month ago.

The first tip is that Barrow will win this game – at 2.15 odd. The host have won three of their last five outings. Moreover, the visitors are yet to win at this stadium.

Our second tip is that Barrow will keep a clean sheet– at 2.75. They have kept a clean sheet in three of their last six home matches. Not to mention that the visitors are facing a goalless drought since November.