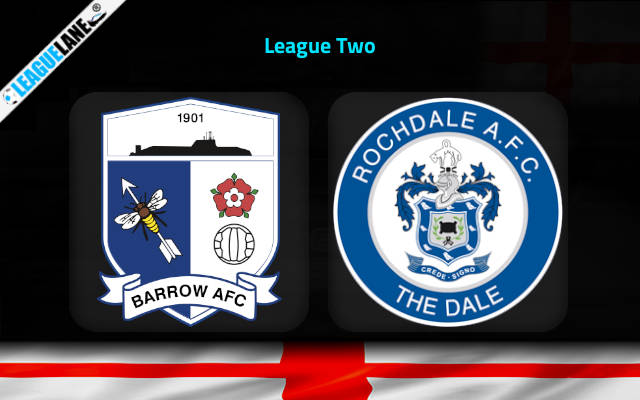 Barrow vs Rochdale Predictions and Free Tips from our expert tipsters when the teams go head-to-head in League Two on Monday, 2 January 2023.

Rochdale will most likely be relegated from this league as they have the worst form. They have lost more than 60% of their matches this campaign. Manager Jim Bentley is facing criticism for the lack of winning performances from his team.

On the other hand, Barrow are facing a winless drought. Their last league victory was against Hartlepool back in November. In their last league outing, they lost to Tranmere by 2-1. They managed to hold Salford in a 1-1 draw last month. This is the only positive result they have picked from their December fixtures.

Both teams have played against each other five times since 2017. The visitors remain unbeaten on all five occasions. Back in October, the visitors won this fixture by 2-1.

Who will win the match between Barrow and Rochdale?

The past records show that the visitors have dominated this fixture. However, it is a completely different situation this season. Rochdale are fighting a relegation battle and have lost their last five outings. At the same time, the host are facing a winless drought.

This fixture is a high-scoring one in recent times. In two of the last three meetings between these two teams, the game ended with three goals being scored.

Both teams have scored consistently in the last two years, with just one exception. We can back the same trend this time as well.

Both Barrow and Rochdale are struggling to win this season. One common observation is that both teams are winless in their last five consecutive matches. Therefore, our first tip is that this game will end in a stalemate – the odd for this tip will be at 3.50 odd.

Our second tip for this game is that Both teams to score – at 2.00. Both teams have scored in two of the last three head-to-head encounters.