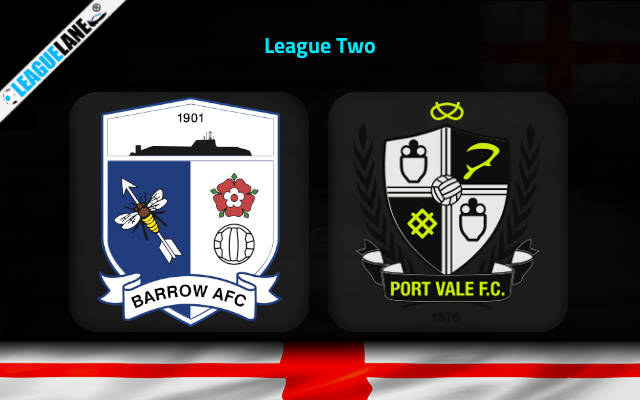 With back to back defeats, Barrow will be hoping to turn the tables as they invite the
Play Off leaders Port Vale to their home ground at Holker Street this Saturday for the 40th Round of the competition.

Valiants are at the 4th spot on the standing with 63 points from 38 games. They won 17 times in the league while drawing a dozen and losing on 9 other occasions. With only 3 points less than Northampton, they are in quest to sneak into the top 3 spots. The side won 4 times from their last 5 league schedules.

Port Vale will go into this match after a 2-0 league win against Sutton United in their last fixture. Over the prior 6 league fixtures, they have conceded a total of 4 while bagging a sum of 11 for themselves.

On the other hand, Barrow resides at the 21st position on the table with a mere 37 points. Of the 38 matches played, they won only on 8 games while losing on 17 other occasions. Only Scunthorpe (with 26) have scored fewer League Two goals than them (with 33), this season. The Bluebirds have not scored more than once in any of their last 14 league games.

The Bluebirds will be looking for an improved result here after a 2-0 League Two losing effort in their last game against Leyton Orient. They have won only once from their last 10 league fixtures. They possess the second worst defense in the league.

Barrow are winless at home since the last 9 home games. They even lost the last h2h at home unable to get onto the scoresheet.

Port Vale have a good record of 14 undefeated games of their last 15 encounters in all competitions. They have lost only one of their previous 13 league encounters with Barrow, and could win 3 successive league games against the Blues for the first time since March 1959.

Considering the current situation of the hosts and their h2hs, we envisage a win for Port Vale this weekend.