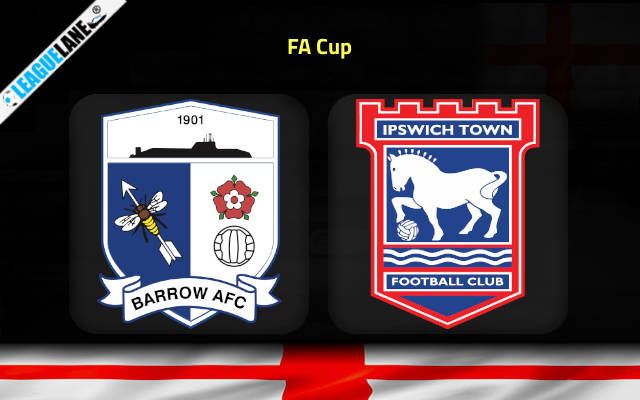 Both teams have fancied low-scoring games of late and we would not be surprised to see a similar scenario occurring this time around as well. None of the last seven matches Barrow played across competitions produced three or more goals, while the same scenario happened in each of Ipswich’s last three games.

Barrow managed to hold Ipswich to a goalless draw eleven days ago at Portman Road Stadium. It means the two outfits are set for a replay of their FA Cup second round clash, scheduled for Wednesday evening at The Dunes Hotel Stadium.

The hosts will certainly enter the game in sky-high spirits. They’ve managed to back up a huge draw against higher-division opponents with a 2-0 home victory over Swindon Town in the weekend’s League Two action.

This win came after a thread of three consecutive league defeats for Barrow who hold the disappointing 19th place in the League Two ladder.

Ipswich, on the other side, decided to part ways with manager Paul Cook just after the mentioned draw with Barrow in the FA Cup.

John McGreal is the new head coach and he did not quite get off to the best possible start to his reign at Portman Road Stadium.

Ipswich fell 2-0 away at Charlton Athletic on the new manager’s debut. They then, however, managed to hold Wigan Athletic to a 1-1 draw on the road on Saturday afternoon.

Tips for Barrow vs Ipswich