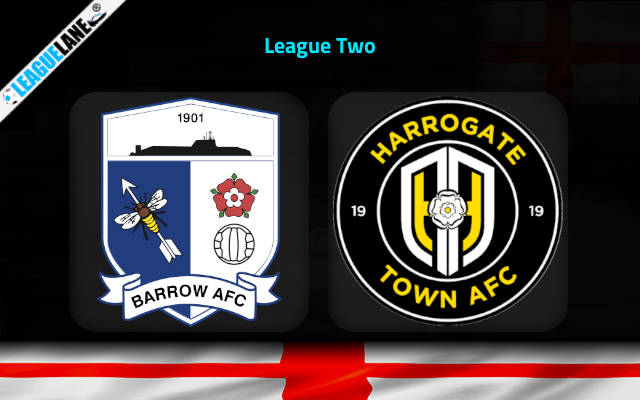 Harrogate won the last league schedule after their 3 games without a win. They won and lost twice from the last 5 league fixtures and are a mid table team. Barrow is down below unable to find a victory since the past 3 league schedules. They won only once since the past 5 league games and are only 3 points safe from relegation. With 10 points and 6 places apart, the Bluebirds will be hosting the Sulphurites at DHolker Street this Saturday.

Harrogate are at the 13th spot on the standing with 41 points from 31 games. They won 11 times in the league while drawing on 8 and losing on a dozen other occasions. They scored 50 in total while conceding a sum of 49 showing their poor defensive structure.

Harrogate Town come into this match after a 3-1 League Two win over Bradford City in their recent outing. They had goals 23 times in the last 6 matches in which Harrogate have sent out their troops, making it an average of 3.83 goals per fixture.

On the other side, Barrow resides at the 20th position on the table with only 31 points. Of the 31 matches played, they won 7 games while drawing on 10 and losing on 14 other occasions. Their total goals to conceding ratio stands at 30:39 so far in the league.

The last league schedule of the home team witnessed a goal-less draw between Stevenage. Their goals record equals just 4 against the opponents during the course of their last 6 matches. In those meetings, Barrow have also seen the tally of goals against them total 8.

We feel that a win for Harrogate is more probable as they are best at away fixtures unbeaten in 56% of the games played on road this season. Moreover, the home performance of the hosts are terrible a they won only 3 out of the 16 games played at DHolker Street this season.