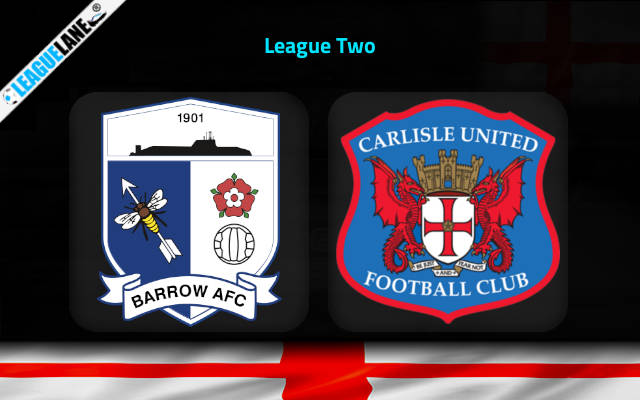 Game week 38 of League Two brings us the match between Barrow and Carlisle on Saturday at Barrow.

Barrow has not had the best season this season. The team has found difficulty with finding wins in the matches, resulting in only a few wins for the team. However, the team has got a win in their last match against Scunthorpe United. Barrow took the lead in the match at the last minutes of the first half and maintained the lead until the end of the 90 minutes. The match ended with 0-1 FT score.

With the win in the last match, the team has ended their 7-game cold streak. The team currently stays 21st on the league table with 37 points from their matches.

Carlisle United has not played consistently in their matches. The team comes into form for a few matches and then their form suddenly drops. This leads to the team having a high number of draws and loss when combined. They played their last match against Newport County, in which Newport has scored two goals in the match while Carlisle could score only one and that too at the 80’minute, leading to a loss for Carlisle with 1-2 FT score.

Their loss in the last match has ended the team’s 4-game win streak. The team now sits 18th on the league table and has got 40 points from their matches so far.

Both teams have not had the best season so far, resulting with both teams ending up in the bottom half of the league table. However, in the recent matches, Carlisle had a four-game win-streak.

Carlisle and Barrow have a good number of draws in their name and Carlisle’s recent performance gives them an advantage over Barrow. So, the match is more likely to end in a draw or in a win for Carlisle. Both of them can be expected to score in this match as well.