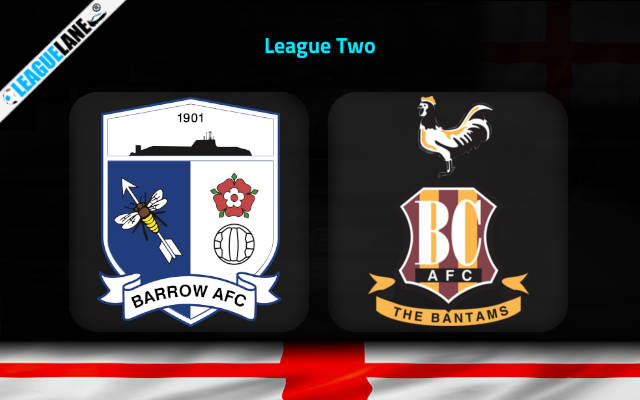 Barrow and Bradford opens the Matchday no 25 in League Two on Saturday when they come across each other at Holker Street.

Barrow have actualy won only five games since the beginning of this season. They sits four spots above the Relegation zone in the League table at the moment.

While the visitors are currently having an unbeaten streak for three games in the league.

Neither of the two outfits have been enjoying a decent form in the season so far and it will be interesting to see whether either will be able to arrest the current slump on Saturday.

It is important to mention that Adams men are unbeaten in the last three league outings. They drew in each of these three, the latest coming last Matchday in a goalless stalemate at Valley Parade.

Bradford have managed five wins so far in this season. However, two of these came on road. They won two, drew 4 and lost 3 of nine league fixtures away from home this season. They have scored 10 along the way.

Therefore, The Bantams have played much better on travels than on the home patch so far in the season. However, The Bluebirds are having some good spirits at home as they awaits The Paraders after finding a win against Swindon in their last league game at home.

They have scored 9 goals in last seven League Two games and conceded 12. This proves that they are capable of finding the net for once at least. But that won’t be enough to surpass a couple scored by the visitors at the other end.

We’re tipping a tight encounter with 1-2 victory for Bradford when all is said and done.