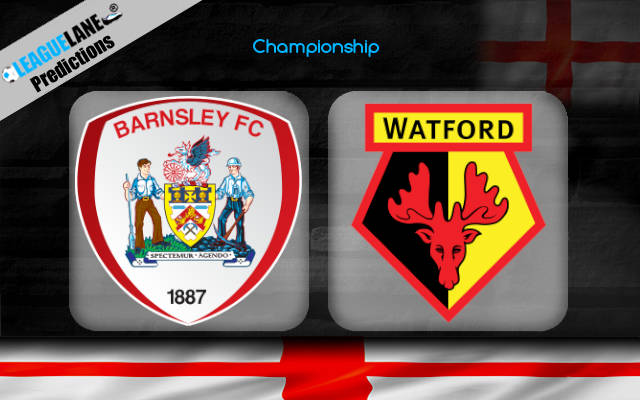 Barnsley have finally ended their winless streak and ended a series of three draws as they beat Queens Park Rangers (3-0) on Tuesday, now hosting Watford with hopes they can build on the performance and secure the points at Oakwell once again. They’ve been tough to score against at this ground and will now hope to show off as a tough nut.

Tykes saw just one loss in five competitive outings here so far, keeping clean sheets on three of those five occasions. They already see the top 6 slipping away and will now be desperate to close the gap, after earning just seven points in eight games. They held off Bristol (2-2), Stoke (2-2), and Millwall (1-1) since mid-October, though, and will want more of the same.

Watford have been just as unpredictable and this came especially obvious on the road. They come into the match just days after being held off by struggling Wycombe Wanderers (1-1) but still have a four-match unbeaten streak behind them too. They haven’t been impressive in the final third when away from home and this could be more worrying ahead of the trip to Oakwell, despite solid records in head-to-head clashes.

Barnsley beat Watford just once in the last five head-to-head encounters since 2012.

We’ve been used to high-scoring clashes but this could prove an unconventional match in that sense.

We thus feel this will be a tight contest on Saturday afternoon and we’ll go for a Draw at 3.25. We feel Barnsley will be desperate to show what they’re made of in an attempt to escape the bottom part of the table, which promises a tough defensive setup before anything else – something Watford could struggle with.

Indeed, we’ve seen the Hornets struggling to impress in the goalscoring department when away from home. We now also hope for few goals which would go in line with our prediction. We’ll thus also go for a low-scoring contest with Under 2.5 Goals FT, which comes at 1.66 at this point.