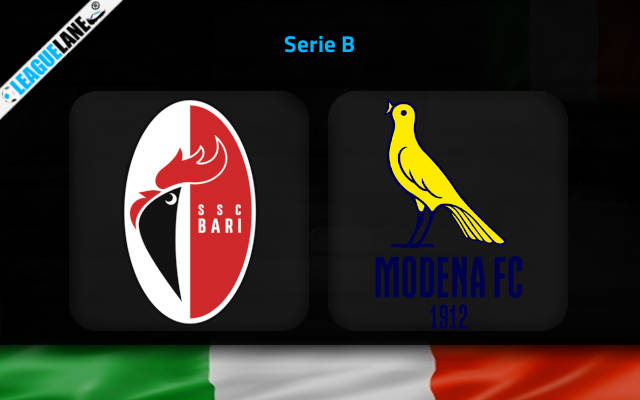 Bari vs Modena Predictions and Free Tips from our expert tipsters when the teams go head-to-head in Serie B on Sunday, 11 December 2022.

Bari defeated Cittadella last time by 3-0. This victory finally ended their five-game winless run. They are presently in the third position on the table.

At the same time, Modena have improved their form since November. They are unbeaten in their last five outings. If they are able to keep this form this month as well they will reach with the top six on the table. However, it will not be an easy task.

The host are unbeaten at home against this team since 2012. Both teams last met in May this year and the game ended in an exciting 3-3 draw.

The visiting team have won only once in their last ten head-to-head meetings at this ground.

Who will win the match between Bari and Modena?

We are backing Bari to take all three points from this game. They are a different team at their home ground this season. It is important to understand that Modena have lost nearly 50% of their matches this season.

Do also note that they have picked up only two wins since October.

Both teams have scored a combined total of over 2.5 goals in two of their last three meetings.

The first tip is that Bari will win this game – at 1.90 odd. The host have played well at their home against Modena. They are unbeaten in the last four head-to-head meetings. Not to mention that they are at the third position on the table.

Our second tip is that Over 2.5 goals with both teams to score – at 2.50. Both teams have scored a combined total of six goals when these two sides clashed back in May this year. Also they have scored in the last three consecutive matches.