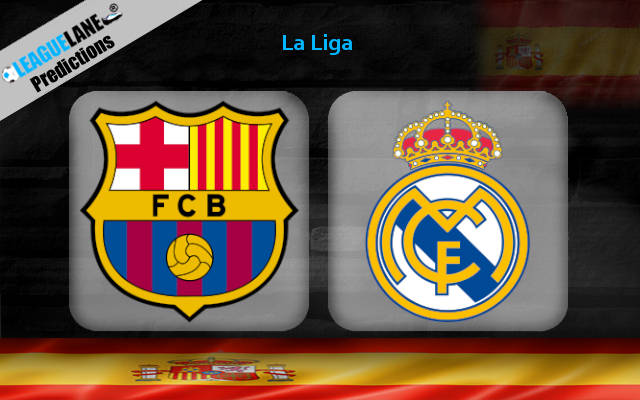 Right after the week that surprised everyone with both the elites of Spanish club football suffering a defeat, comes the biggest and most anticipated match in La Liga every season. Even when the typical Ronaldo-Messi war front is absent, the El Clasico has not lost its fierce nature in the competition.

Barcelona is at the mid-table spot after taking 7 points from 2 wins and a draw in 4 appearances so far this season in the campaign. Having conceded just 2 goals so far, they are still looking sharp in their defense after all the distress in the camp during the break.

Real Madrid has dropped two spots to third place in the table with their last defeat in the league. They have picked up 10 points from their 5 league clashes until now. Zidane’s 14-game unbeaten run in the campaign ended with the 0-1 loss at home to Cadiz in the previous encounter.

Barcelona has been struggling to find their best form in the campaign. Since the management has sold several first-team regulars in the recent summer transfer window, it is likely the trouble that they expected in the dugout with their decisions.

The 5-1 win at home against Ferencvaros in the Champions League group stage will not be compelling support for the host ahead of the El Clasico in their league schedule. In the campaign, they faced a 1-0 defeat on the road against Getafe last time out, which was a blow to the Catalans.

Los Blancos had the same demise last week when the promoted side Cadiz took all three points from Zidane and the team in their visit to Alfredo di Stefano Stadium. Considering that Real Madrid has been struggling in front of the goal of late, we are tempted to back the tip for under 3.5 goals.

Messi will be the key player for Barcelona as always and Ronald Koeman will put his faith in the team to back the Argentinian striker to bring the three points home. On the other side, Zidane has had his struggles with finding a reliable striker in the middle.

Ramos’s penalty conversion is a great asset to the team. Benzema is a dependable striker but doesn’t stand out like Cristiano Ronaldo. Vinicius Jr is another rising star in the making, but it is hard to see whether he can step up for the El Clasico like the last time he appeared last season.

With both sides having a small hope for slotting in at least a goal, the tip for a BTTS will probably serve the purpose in the encounter to yield decent returns for the punters. Besides, the most anticipated scoreline at Camp Nou on Saturday will be a 1-1 draw in ninety minutes for the first El Clasico this season.