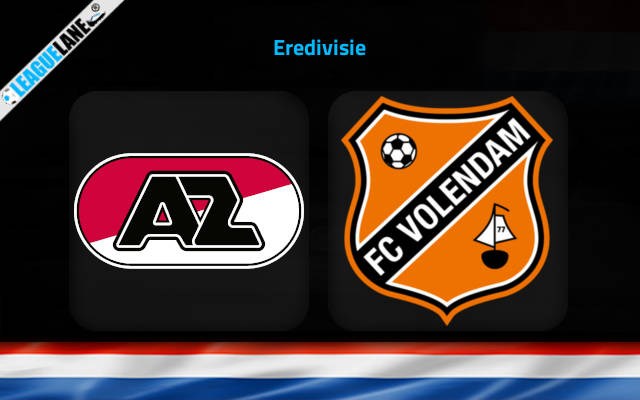 Two back-to-back defeats have stopped AZ Alkmaar’s chance to reach the top of the table. Now they have a good opportunity ahead of them as they will face Volenadam who are at the bottom of the table.

Manager Pascal Jansen thought that he should change the team’s formation after they picked up an important victory over Utrecht earlier this month.

However, his decision has led the team to concede two consecutive defeats. The team’s unbeaten record is now a distant memory as their defeat against Feyenoord was their first defeat of the season.

In their most recent game against Excelsior, they conceded two goals within the opening 35 minutes of the game. Excelsior goalkeeper Stijn Van Gassel deserves a lot of credit as he stopped seven shots on target.

On the other hand, Volendam’s season is now beyond recovery. They have only won a single game this season. Their only hope is now in the KNVB Cup competition. In the league they most recently lost against Heerenveen by 3-1.

The only positive result for them this month is the 1-1 draw against Emmen. No other team in the Eredivisie have conceded more goals than the visitors. Moreover, they have lost 63% of their matches this season.

Yukinari Sugawara has scored two goals in his last three appearances for Pascal Jansen’s side.

You can back the following, as our first prediction is that AZ Alkmaar will win this game by 2-0 – the odd for this tip will be at 8.00. The host have an excellent home record against Volendam. They have won all the games since 1996.

Also, our next tip for this game is that the AZ Alkmaar will keep a clean sheet – at 2.00 odd. In four of the last five overall head-to-head matches the host have kept a clean sheet. Do also note that the visitors have conceded thirty-one goals till now.