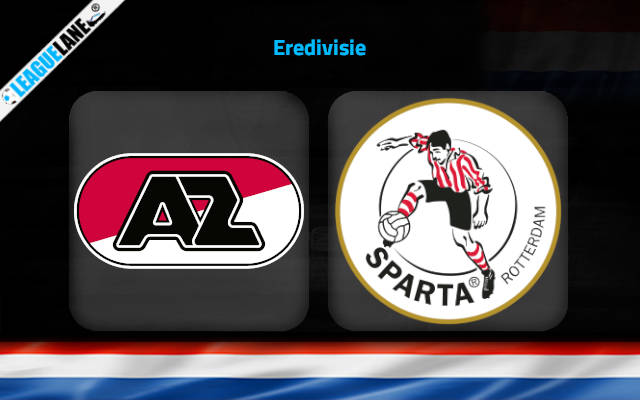 AZ Alkmaar has not finished outside the top 4 positions in the last 4 seasons of the Eredivisie. This record is in real danger of coming to an end. With the league approaching its halfway mark, the club sits in the bottom half of the table.

Sparta Rotterdam on the other hand has been stuck in the relegation zone for most parts of the season and have failed to climb up the table. This despite other teams lower in the table failing to perform. Read our Preview, Predictions, and Betting Tips with Analysis here.

The combination of difficult games and their match congestion due to the participation in the Conference League has caused AZ their position in the league table. Where they find themselves in the 12th position with 17 points.

In the Conference League, they are top of their group. Undefeated and 4 points clear of the second-place team.

The Castle Lords with a couple of wins and 4 draws across their name are 16th in the league. They are two points behind safety.

The Cheeseheads despite their position in the league have been excellent at home. The club has suffered just 1 defeat since January in this venue. Considering the visit of super powers domestically and the European stage this is impressive. They should dominate a side that has 1 league win this season on the road.

The visitors have one of the weakest defences in the league. The hosts have scored an average of 3.20 goals in their last 5 home wins, they should be able to produce such numbers in this fixture.