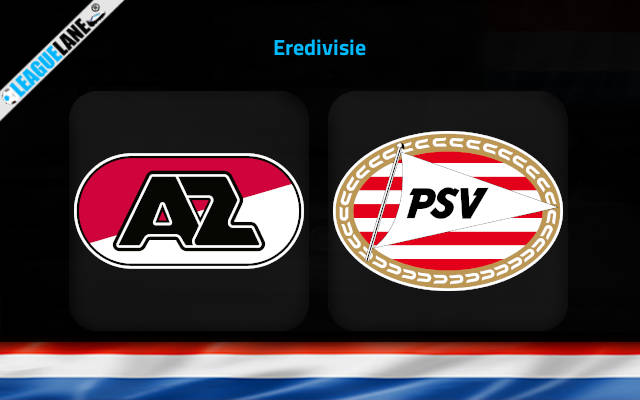 Not many teams are as lethal as PSV Eindhoven this season and they will be aiming for their fourth Eredivisie win on the bounce on Saturday.

From the heart-ache of Champions League exit, PSV bagged a 5-2 win against Groningen just before the international break to make it 3 in 3 wins in Eredivisie this season. They are joint leaders with Ajax and fittest of all teams in the division with their competitive campaign starting at the end of July.

PSV have scored a massive 27 goals from 9 games played so far, combining Champions League, domestic cup and league games. Eleven of those came in this season’s Eredivisie.

AZ Alkmaar had a slow start to the campaign and crashed out of the Europa League with a 3-2 aggregate defeat to Celtic. They have only played two matches in the league, the latest a 3-1 win over Heerenveen.

At the start of the season, AZ lost 0-1 at Waalwijk and with 1 game fewer than other teams they are sitting at 11 on the log.

At the end of last season, AZ was third in the league, just 1 behind their Saturday visitors. They were the second highest scoring team in the league behind Ajax.

But PSV were not behind with 1 goal fewer than their rivals, but were the second best defence while AZ were 5th best.

PSV has been impressive in early parts of the season and they have a crop of players from last season performing at the peak of their career. Mario Gotze and Eran Zahavi are the ones that stand out, but we would like to add the likes of Andre Ramalho and Armindo Bruma to the list.

AZ may need a few more matches to get their match sharpness, they hardly looked comfortable on the field and their head-coach Pascal Jansen might be a bit worried with the timing of this fixture.