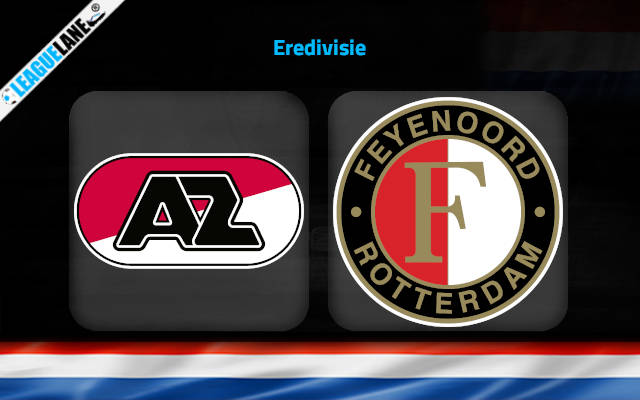 League leaders AZ’s unbeaten record this season will be at risk as they will face another top team Feyenoord at home.

The host are the best team in the league this season. For the past few years Ajax dominated the Eredivisie, this has now changed as the team is at the top of the league. In their most recent game, they defeated Utrecht by 2-1.

The visitors are also in excellent form during this campaign. The team under Arne Slot have only lost once this season. Most recently, they won against Twente by 2-0. This victory brought relief for Arne Slot’s side as they were on a two-game winless streak before.

AZ’s secret to success is that they have a well balanced team. This is why six different players scored all the goals in their last two league outings. The defensive performance also needs to be praised as they have conceded the least number of goals amongst the top four teams.

This race to the top four is increasing very quickly this season. This game will act as a litmus test for the host as they are currently the title favourites.

Our prediction is that Over 2.5 goals with Both Teams to score – the odd for this combined tip will be at 1.95. This is after considering that in the head-to-head matches, three of the last five matches have seen at least three goals being scored.

Also a combined total of fourteen goals have been scored by both teams in just three of the last five matches.

Our next tip for this game is that AZ will win this game- the odd for this tip will be at 2.50. Since 2019, both teams have met five times, out of which in four games the host won.

Also, you can bet on Orkun Kökçü to score anytime – at 5.00 odd. The number 10 has been very decisive for Arne Slot’s side. He scored two goals in his last three Eredivisie matches.