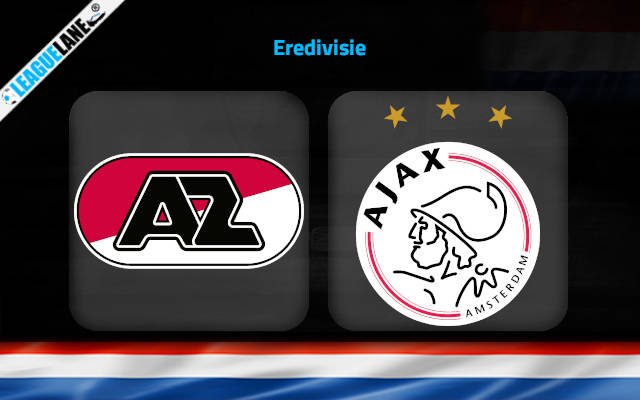 AZ Alkmaar will play host to the reigning champions Ajax in match-day 7 of Eredivisie at AFAS Stadion on Sunday.

Naturally, Schreuder’s men are massive 1.40 favorites for the win. They have eventually ended the last season with 83 points, two points clear off the competitors.

Ajax had lifted the Dutch league title the last season and that too in a dominant fashion. They had scored the most number of goals of all the teams in the competition and had conceded the least as well.

The team had performed at an impressive level on the road in their last several appearances and had found the back of the net in plenty as well. It seems that they have extended their impressive thread from the past season.

Ajax won all the 6 appearances they had so far this new campaign. The team had scored two or more goals in 5 of the previous 6 games too.

Meanwhile, AZ Alkmaar seems to have picked up things from where they left off in the previous season. They had finished fifth in the league standings the last time.

The team had started off this season with a positive outcome and has impressively maintained it further. They are currently on a 6-game unbeaten streak in the campaign. 4 of those 6 were victories.

Ajax is on an exceptional form this season. They won all the fixtures they have appeared in this season so far.

Alkmaar has been also successful in evading defeats, but the stunning run of Ajax will stand tall of those for sure.

Taking into account these observations as well as their recent h2h recordings, we expect a win for the visiting side Ajax on Sunday.