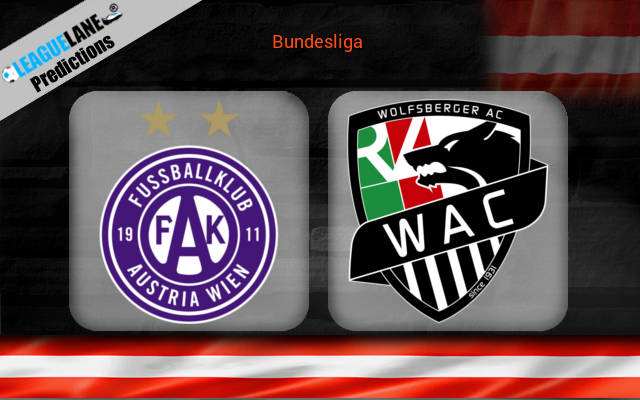 With a 4-game winning streak, The Violets are on an incredible as of late in the league and are leading the Conference League Play Offs. They have been denied 17 points due to competition rule and are only 2 points away from climbing into the top three. Wolfsberger are above them winning and losing twice from the last 5 fixtures and they currently glides over the Europa Conference League spot. With only 2 points separating the two, GAM FC will travel to Generali Arena in Vienna for the 23rd round of Bundesliga.

The home side is at the 4th on the standing with 16 points from 22 games. They won 8 times in the league while drawing on 9 and losing on 5 other occasions. They scored 31 in total while conceding a sum of 23 which shows an improvement in defense is needed.

Austria Vienna marked their 4th consecutive league win over Admira by 1-2 last week. They have been on a persistent run of goalscoring form, netting in each and every one of their last 6 games managing to rack up 10 during the time while also conceding a total of 5.

On the contrary, Wolfsberger resides just above them at the 3rd position on the table with only 18 points. Of the 22 matches played, they won on 11 games while drawing on 4 and losing on 7 other occasions. Their total goals to conceding ratio stands at 34:32 up to this point.

The visitors will go into this game following on from a 1-0 league win against LASK Linz in their previous fixture. They have been scored against on 5 of their last 6 games, seeing their opponents hit 8 goals in all.

We feel that a narrow win for the hosts are up for cards as the visitors lost the last 2 games on road while deprived a win since the last 3 games. Meanwhile, the hosts won the last 2 games played at Generali Arena and has that confidence in hand.