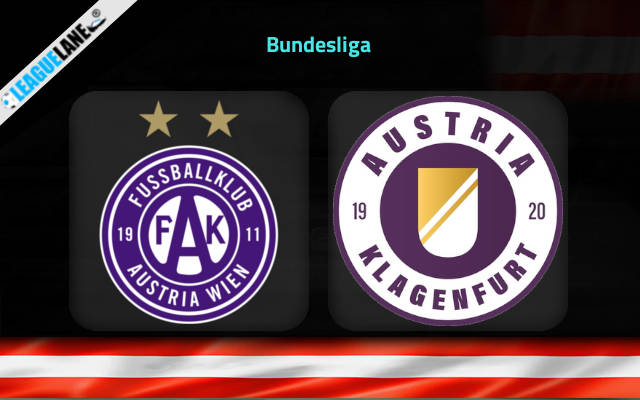 In the Championship Group, with 3 back to back losses, Austria Klagenfurt will be hoping to turn the tables as they face Austria Vienna who are in the Europa Conference League spot. They will be facing each other this Sunday at Generali Arena.

Austria Vienna is at the 3rd spot on the standing with only 20 points from 24 games. They won 9 times in the league while drawing on 10 and losing on 5 other occasions. As a part of competition rule, they have been reduced 17 points. A tight competition for the 2nd spot is seen with them and Sturm Graz, as they both are only a point in difference.

Austria Vienna will play in this game following on from a 1-1 league drawn result against Rapid Vienna. The tally of goals that have flown into the back of their net during their past 6 games stands at 3.

On the other hand, Austria Klagenfurt resides at the 6th position on the table with a mere 15 points. Of the 24 matches played, they won only 7 games in the league while drawing 9 times and losing on 8 other occasions. As a part of competition rule, they have been reduced 15 points. Their conceding figure shows that they really need to improve their defensive line.

Austria Klagenfurt marked their third loss in a row against Sturm Graz previously. They have been scored against on 5 of their last 6 matches, giving their opponents 12 goals overall. The visitors are in a quest to climb into the Play Off region.

Austria Vienna is on an 8-game unbeaten run at home across all competitions. They have also win the last 3 home league fixtures in a row.

Ahead of this one, Austria Klagenfurt have not won away from home in their last 3 league matches. They are also on back to back losses on road.

We feel that a win for hosts is up for cards as their impressive home performance along with their h2h dominance strongholds it.