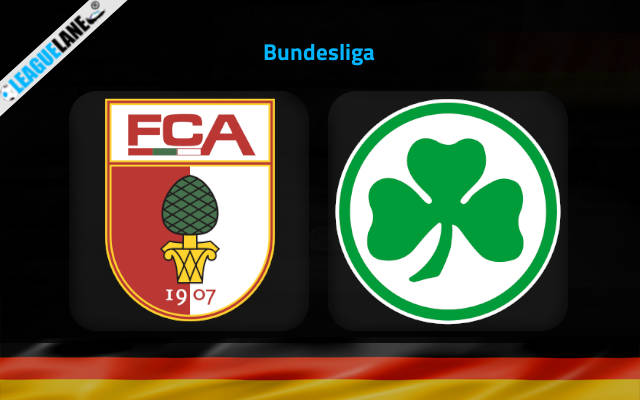 Greuther Furth will have a farewell from the elite tier of German football on Saturday afternoon when they travel to WWK Arena to take on Augsburg in the 34th round of the competition.

The top flight proved to be too strong for Greuther Furth who do not have the budget required to stay competitive at this level.

Furth became the first relegated team a while ago and they enter the final day fixtures with a twelve-point deficit to Stuttgart who hold the relegation playoffs spot right now.

Greuther Furth will at least have a chance to pull off a result in their last game in the elite since they take on out-of-form Augsburg on the occasion.

Augsburg have secured survival in the top tier a while ago as well, and they have dropped in form drastically since them.

Markus Weinzierl’s men lost four of the previous five Bundesliga matches. They will come into this tie off the back of a tough 4-0 defeat to RB Leipzig last weekend.

Augsburg have thus shipped four goals in each of the last two league outings. They are now set to face the worst defensive line in this term of Bundesliga which is why we certainly have reasons to expect a goal fest on Saturday afternoon at WWK Arena.

Both teams lack defensive meticulousness these days and we can hardly see either keeping things quiet at the back here. The lack of proper motivation for either outfit makes the Over 2.5 goals FT & Both Teams To Score an even better betting option at the odds of 1.72.

As for the outcome, we can find the value in backing the visitors to claim the victory on their farewell from Bundesliga at the sky-high 5.25 odds. After all, we should not forget that Augsburg lost four of their previous five league matches.