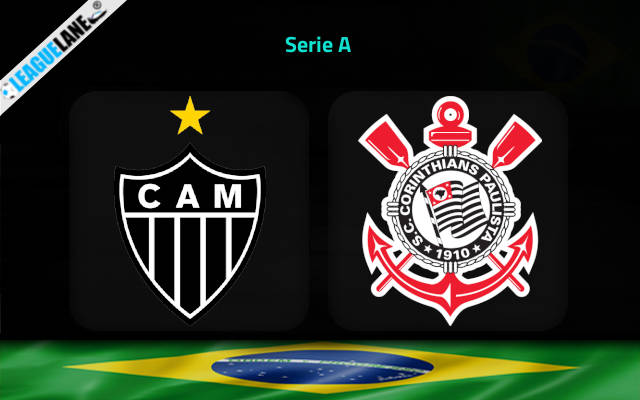 Atletico Mineiro have been almost impeccable at home throughout the whole season. They won 13, drew 1, and lost 1 of 15 league fixtures at the Mineirao and it is very hard to back anything else but their win here.

The top two defenses in the elite class of Brazilian football are set to battle it out in the 31st round of the competition on Wednesday evening at the Mineirao.

The hosts have been by far the best team in the country this year and only a miracle could prevent them from lifting their second Serie A title by the end of the year.

Atletico Mineiro are ten points clear at the top of the standings with eight matches left to play.

They have not won the league trophy since 1971 and we can only imagine the thrill and excitement their fans and everyone in and around the club are experiencing these days.

Atletico Mineiro will try and get one step closer to the silverware with a win over 6th-placed Corinthians in the derby of mid-week’s round.

The visitors have a battle of their own as they managed to cut the gap behind the fourth-placed RB Bragantino down to two points after the weekend’s victory over Fortaleza.

Corinthians claimed seven points from the last three league affairs but their poor away record (just 5 wins in 15 matches) prevents us from going for their win here.

Tips for Atletico Mineiro vs Corinthians