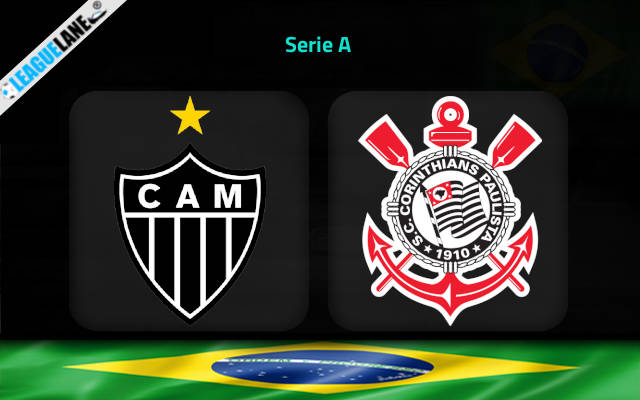 Gameweek 10 of Liga Profesional is set for this weekend as Atletico MG play host to Corinthians where both these sides are level on points and are at the top three spots. These two teams will be seen clashing at Mineirão, this Sunday.

Corinthians are at the 2nd spot on the standing with 32 points from 18 games. They won 9 times in the league while drew on 5 and lost on 4 other occasions. The visitors need just 5 more points to takeover the top spot.

The visitors go into this meeting following on from a 3-1 Serie A win as they beat Coritiba in their previous fixture. Vítor Pereira’s men have managed to stick the ball in the net 5 times throughout their most recent 6 matches. The aggregate amount of goals that they have conceded during the same adds up to nine.

On the other hand, Atletico MG resides just below at the 3rd position on the table with 32 points. Of the 18 matches played, they won and drew 8 games each while having lost on twice other occasions. The hosts have a solid attacking front, where they have managed to score 26 goals in total.

The hosts will play in this match following a 1-1 league drawn game over Cuiaba. Fewer than 3 goals per game were seen in 5 of the past 6 meetings where Atletico Mineiro have been participants.

Atletico Mineiro have not been beaten in the league by Corinthians in their previous 5 matches. They are also unbeaten in their last 6 league matches at home. They have kept 3 clean sheets in the last 5 games, conceding 3 goals during this period.

Meanwhile, Things have not been going that well in front of goal for Corinthians recently, with the side failing to score in 2 of the last 5 games. They also haven’t won away from home in the past 4 league games.