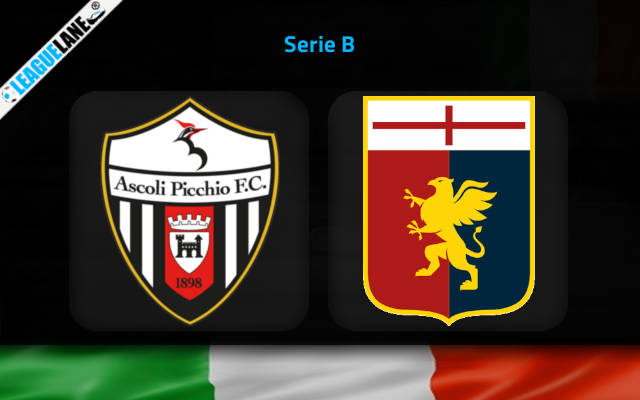 Ascoli vs Genoa Predictions and Free Tips from our expert tipsters when the teams go head-to-head in Serie B on Sunday, 11 December 2022.

Genoa got their much-needed win as they edged past Suditrol. This win helped them reach the fourth position. If Alexander Blessin and his men manage to win this upcoming fixture, it will take them all the way to the second spot.

On the other hand, Ascoli conceded their fifth defeat of the season. They are winless in their last five outings. Moreover, Cedric Gondo will be available for selection as he received a red card against Como.

The visitors are unbeaten in the last six overall head-to-head meetings. Another interesting fact is that both teams will be playing against each other after a period of three years.

Do note that Ascoli have not won at this ground since 1989.

Who will win the match between Ascoli vs Genoa?

We are backing Genoa to take all three points from this game. They are the heavy favourites to win as they are unbeaten at this ground in the last three decades.

Moreover, the host are the only team in the league to have a goal difference of nil. This shows how inconsistent they are.

The visitors have scored over 2.5 goals in their last four consecutive meetings at Stadio Cino e Lillo Del Duca.

Both teams are in decent goal-scoring form. They have scored in three of the last five head-to-head meetings. They will most likely repeat the same this time as well.

You can back the following, as our first tip is that Genoa will score over 2.5 goals– at 5.50 odd. Since 2004, the visitors have scored at least three goals in their last four victories against Ascoli.

Furthermore, our second tip for this game is that Both teams to score – at 2.00. Both teams have scored a combined total of ten goals in their last two encounters.