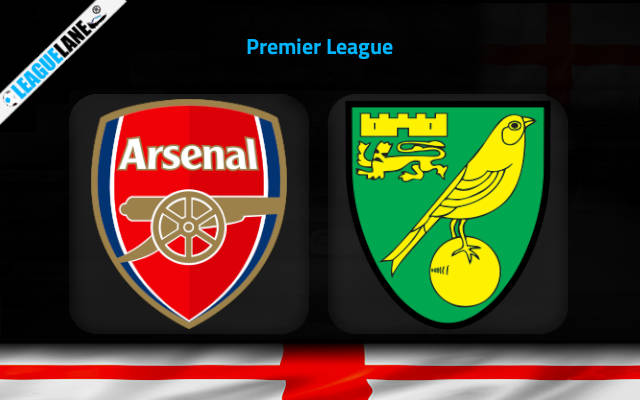 Arsenal look for their first win of the Premiership campaign when they host Norwich City on Saturday.

Disastrous after Gunners lost all their 3 matches played in the 2021/22 season so far and yet to put the ball in the back of the opposition goal post.

Just before the international break, Manchester City had an opportunity to celebrate with fireworks at Etihad in the 5-0 thrashing of the Gunners.

Arsenal had previously lost to cross rivals Brentford and Chelsea. Among the positives, Thomas Tuchel’s Blues did not humiliate the Gunner, though they came close, thanks to a combination of woodwork and poor finishing.

Till now, we haven’t seen any flair from the Arsenal players. However, they can only improve from here otherwise brace for a bottom half finish in the table, with or without Arteta.

Norwich as expected started the season on 3 defeats and conceded 10 goals while scoring just 1.

When I say “expected”, knowing Daniel Farke as an eccentric coach, there is no room for heavy defensive tactics in his books. He likes his team to play some fluid attacking football and heavy defeats are likely when they go against the likes of Liverpool (0-3) and Manchester City (0-5).

The team did put up a real fight against Leicester City and consider themselves unlucky to have been denied by a late goal from MNark Albrighton. The Canaries had a goal disallowed shortly after and must take the positives from the 1-2 defeat to the Foxes.

A win is inevitable for either team after losing the first three matches of the season. But Arsenal come in front as the team capable of orchestrating the music at the Emirates.

We also see this as a high scoring game, neither had shown any stability in defense this far and will be more focused on fixing the problems in the attacking front.

And in quiet corners, Norwich sense they can win this game and they cannot be at fault for this.