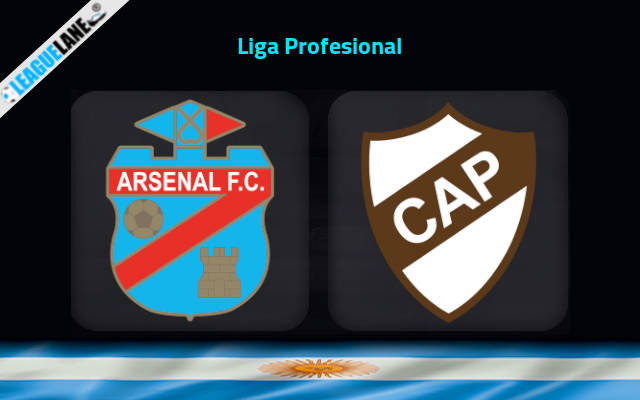 Matchday 8 of Liga Profesional is set for this weekend as Arsenal Sarandi play host to Platense where both these sides differ by 3 points but are separated by 6 places. These two teams will be seen clashing at Estadio Julio Humberto Grondona, this Saturday.

Platense is at the 6th spot on the standing with 13 points from 7 games. They won 3 times in the league while drawing on 4 and have not yet lost a game. Momentum is really building for them as they have now gone 6 games without losing. The team has one of the best defense in Liga Profesional.

Last time out, El Platero drew 1-1 in the Superliga match with Newell´s Old Boys. A series of resolute performances from the Platense defensive unit has seen their conceding tally amounting to just 3 from their past 6 clashes overall.

On the other side, Arsenal Sarandi resides at the 12th position on the table with 10 points. Of the 7 matches played, they won twice while drew 4 times and have lost on one other occasion. The hosts have seen netting frequently but they tend to concede more of the same which hints that some defensive adjustments is needed.

The hosts will be looking for a repeat result of the 0-1 league success against Patronato. Leonardo Madelón’s men have seen rewards for their attempts on goal a sum total of 8 times over their prior 6 outings.

The visiting side is still unbeaten in this tournament but is not in a better position due to many draws. Platense have enjoyed playing away from home recently, with the side currently unbeaten in 3 games.

Meanwhile, Arsenal Sarandi side has not won against this rival since their last 3 h2hs. At home, they remain undefeated in their last 4 matches.

In 2 of the last 3 meetings, there have been 3 clean sheets. With 2 such solid defenses, the chances of one of them not scoring are high. We therefore predict an away win or draw, this Saturday.