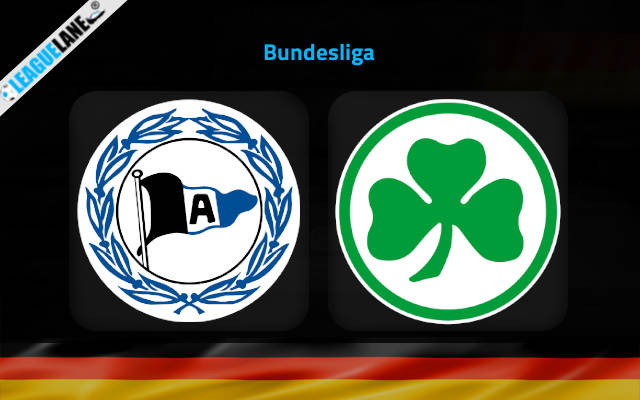 Arminia Bielefeld and Greuther Furth will wrap the weekend fixtures of Bundesliga as they compete in a relegation battle at the SchücoArena this Sunday.

Arminia Bielefeld with a win here could not only get themselves out of the relegation zone but could also realistically kill any chance of their opponents surviving relegation.

As for Greuther Furth, this is a must win competition if they fancy their chances of a comeback as they cannot afford this opponent to get away taking a further three points lead over them.

Die Arminen came from a two goal deficit to steal away a point in their most recent match against Freiburg on the road as the match ended with a 2-2 score line.

With two wins preceding that result the team now occupies 17th position in the league table and are now just a point away from safety.

Kleeblätter managed a goalless draw on the last matchday at home against another relegation threatened team Stuttgart.

This was the club’s second consecutive scoreless draw. The team has managed five points from their previous four league fixtures, which is a mind boggling 83.3% of their total points this season.

However, it could turn out to be a case of too little done too late as they now sit bottom of the German League twelve points away from safety.

Die Blauen have avoided defeat in three previous home games where they have managed to add five points to their tally. While this might not be the most impressive thing, it is significantly better than a club that has lost every away fixture this season. Therefore, except for a home win in this fixture.

The hosts have scored in all but one of their previous five home fixtures. Considering this stat, I have backed them to score at least once in the second half.