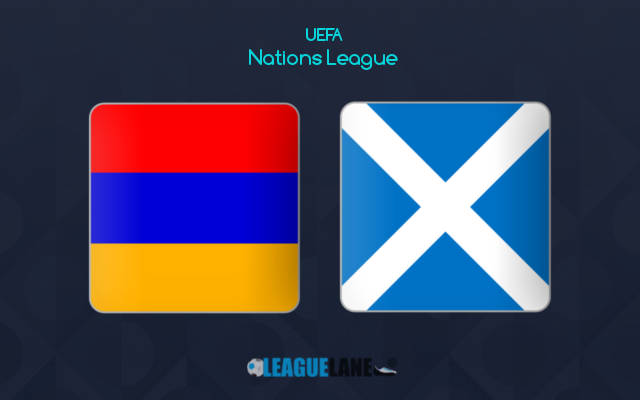 Armenia will clash with Scotland in a match of League B in Group 1 of UEFA Nations League. They will be seen crossing swords this Tuesday at Vazgen Sargsyan Republican Stadium.

Armenia is currently at the last position on the group with 3 points from the 3 games played. They won only once while losing on twice other occasions. The hosts won against Ireland in the opening fixture but have lost subsequently to Ukraine and Scotland by a combined scorecard of 5-nil.

Armenia will be looking for an improved result here after the 3-0 UEFA Nations League defeat last time out to Ukraine. They have been one of the biggest surprises of this tournament since it’s inception, registering back to back promotions to reach where they are now. Bu they have seen slipping up lately.

On the other side, Scotland is at the third spot with 3 points in hand from playing 2 games. They will be keen to bounce back after suffering a 3-0 defeat in their last match against Ireland.

The Scots have only won one of the last 5 matches across all competitions. With playing fewer games than their opposition, they could yet give promotion a good shot if they can win this upcoming fixture. In the course of their last 6 matches, Steve Clarke’s men have fired 8 times, giving them the goals per game average of 1.33.

Armenia have only won 2 of their last 14 matches across all competition and look like front runners for relegation. From their last 5 home matches they have conceded 10 goals in total while netting only 4 times.

Meanwhile, Scotland are three points behind group leaders Ukraine and will need a win to try and keep pace with the leaders. They have lost only once from their 5 games played on road. The visitors need to recapture the form that saw them win 6 consecutive matches during their WC qualification campaign.

The visitors also won the reverse fixture by 2-0 and while considering their current form, we feel that they could win here.