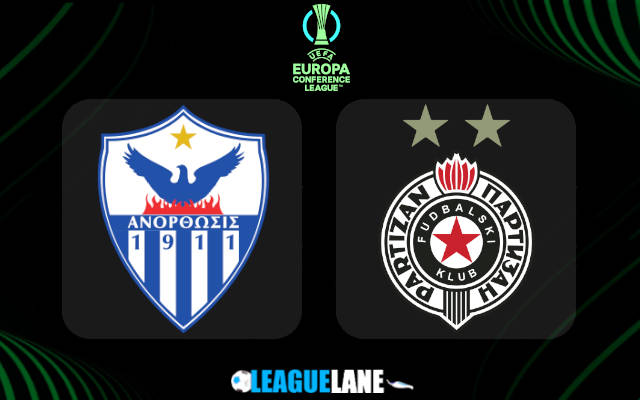 Anorthosis take on Partizan in the Conference League on Thursday night as the visitors look to get off to a strong steady start to their competition.

The hosts have found their way into this competition as they have faced Rapid Wein in the third qualifying of the Europa league where they lost to an aggregate score line of 4-2, even though they had displayed a fighting performance in the second leg of that fixture.

However, they won their Conference League play-off tie against Beer Sheva with an aggregate score line of 3-1 as Anorthosis took advantage of their home ground and took the tie in their favour.

The hosts currently sit in 10th place in the Cypriot First Division after 1 league game played as they have suffered a 2-0 loss to Doxa which saw Miloš Deletić get sent off in the 27th minute of the game along with Tidjani Anaane.

The visitors come into the competition as they were eligible to start their qualifying process in the second qualifying round of the Conference League where they defeated Dunajska, PFC Sochi and Santa Clara with an aggregate score of 3-0, 3-3 (4-2 on penalties) and 3-2.

In the Serbian SuperLiga, Partizan currently sit on top of the table with 21 points on bard after 7 league games as they have won all their league games this season, keeping a 100% winning percent record in the league so far.

In the league, Partizan come on the back of a 3-1 victory over Radnicki 1923 which saw Miloš Jojić, Filip Holender and Ricardo Jorge Pires Gomes get on the score sheet for Partizan.

The visitors have enough experience at the European stages in the past as they have been present in the Europa League for few times. Hence, we back the odds at 2.10 for Partizan to win at full time.

On the other hand, we expect both these teams to get on the score sheet as they will be looking to set their mark in this competition. As a result, we back the odds at 1.90 for both teams to score.