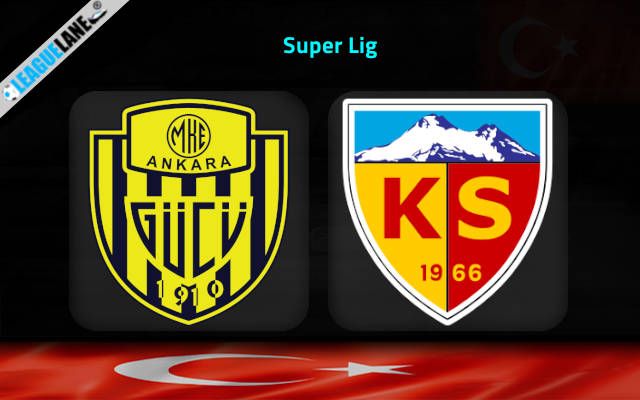 Ankaragucu vs Kayserispor Predictions and Free Tips from our expert tipsters when the teams go head-to-head in Super Lig on Sunday, 08 January 2023.

Despite scoring the opening goal, Ankaragucu could not get past Galatasaray last time. This result has made the situation tense at the club as they are just one point from reaching the relegation zone.

At the same time, Kayserispor can forget their top four ambition if they don’t start winning games this month. They are currently on a three-game losing streak.

Three of the last four head-to-head matches have ended in a stalemate. The last time the host celebrated a victory against this team was over three years ago.

At Eryaman Stadium the visitors are unbeaten in the last two head-to-head meetings.

Who will win the match between Ankaragucu and Kayserispor?

Both teams are finding it difficult to win league fixtures at this stage of the season. The situation is worrisome for the host as they are close to the relegation zone. The past record shows that the last meeting between these two teams ended in a goalless draw.

This fixture is not a high-scoring one since 2019. The last five encounters ended with not more than two goals being scored combined.

The chances are high that both teams will score in this fixture. At Eryaman Stadium both teams have scored in two of their last three encounters. The only time both teams didn’t score was during the 2020/21 season.

In three of the last five encounters, the game ended in a stalemate. On top of that, both teams have not won a league game in the last two outings. Therefore, the first tip is that the game will end in a draw– the odd for this tip will be at 3.50 odd.

Our second tip is that Under 2.5 goals will be scored – at 2.00. The last two encounters ended with less than two goals being scored. At Eryaman Stadium a similar trend is observed as well.