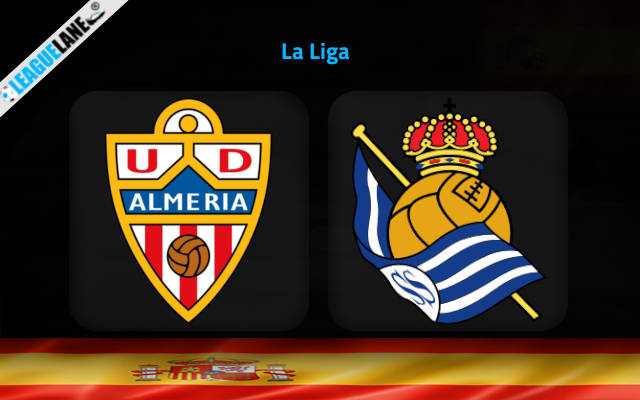 Almeria vs Real Sociedad Predictions and Free Tips from our expert tipsters when the teams go head-to-head in Spanish La Liga on Sunday, 8 January 2023.

Sociedad have been the ‘best of the rest’ in the Spanish La Liga this season, and are really going after a podium spot. They are in great form after the World Cup break, and will be eager to keep their impressive run alive.

Meanwhile, Almeria have been stuck in the bottom half of the league table right from the start of the campaign, and their few wins have come against some of the worst teams in the La Liga.

Goals have always come in plenty whenever these two teams locked horns in the past. In fact, the last three meetings in a row had goals from both teams, as well as three or more goals each.

Moreover, barring a single encounter, 100% of clashes since 2010 had three or more goals. And it is to be noted that the hosts scored two or more goals in every single appearance at this stadium since 2010, in h2h meetings.

Who will win the match between Almeria and Real Sociedad?

As per recent form, Sociedad stand the best chance to secure the three points this weekend. They are going after a podium spot, and have also been on a 100% winning streak since the season resumed after the World Cup.

Meanwhile, Almeria have struggled for consistency all through the campaign.

Previous h2h clashes have followed a clear trend. Goals have come in huge numbers whenever these two teams locked horns in the past. In fact, the last four such match-ups had a total of 17 goals combined.

Once again this is a pretty reasonable prospect. Not once have Almeria kept a clean sheet against this opponent, while they themselves have scored two or more goals in every single h2h clash at this ground.

Real Sociedad to Win at 2.00 odd is a great pick considering the level of dominance the team has shown through this season. And now they have the momentum as well, as they are on a winning streak after the break.

The second tip would be Over 2.5 Match Goals @ 2.20, considering the sheer number of goals that have been produced in h2h match-ups in the past decade. Even the latest such fixture ended in a 2-2 draw.