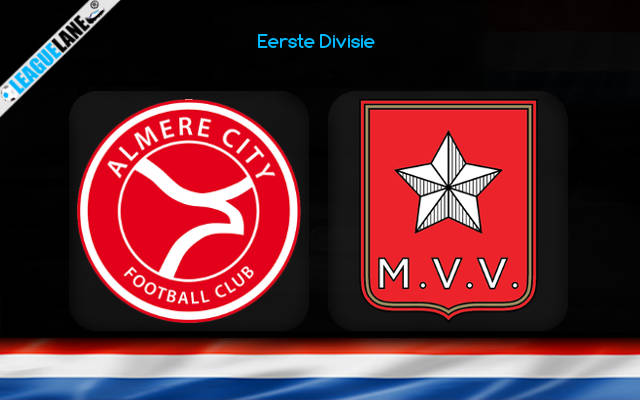 MVV have been struggling badly to perform on travels since the start of the season. They won two and lost five of seven away outings this term. Klaas Wels’ men have a horrendous 4-20 goal difference along the way. We believe the hosts can capitalize on this as well as on a strong attacking performance from the last weekend’s game against Excelsior.

Outfits with two of the worst defensive records in the entire division are set to take on each other on Friday evening in the 16th round of the Eerste Divisie.

Almere City have played a crazy eight-goal thriller on Sunday away at Excelsior but will certainly go into this in much higher spirits than their counterparts.

Their back line once again revealed the well-known holes, but it is the forward line that has done a terrific job for Gert Verbeek’s team on the occasion.

To be more precise, German forward Jonas Arwelier completed a second-half hat-trick with three goals within a nine-minute span in a crazy 4-4 draw at Van Donge & De Roo Stadion in Rotterdam.

Almere City thus have a win, a draw, and a defeat in the last three league outings. The draw against the second-placed Excelsior will, however, represent a big confidence-boost for Verbeek and his troops.

Their Friday rivals MVV suffered a disappointing 0-1 home defeat to Den Bosch on Monday evening, failing to register more than a single shot on target on the occasion.