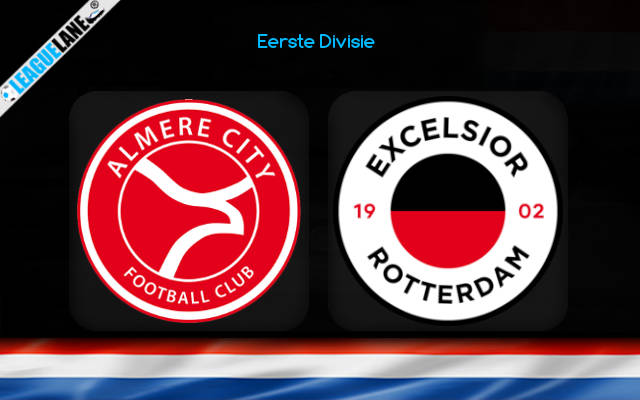 Game week 33 of Eerste Divisie brings us the match between Almere and Excelsior on Friday at Almere.

Almere City has won consecutively in their four recent matches. Also, from the last ten matches, the team has won in three, drawn in three and lost in two. The team now sits 13th on the league table with 35 points from their matches so far.

Almere City played their last match against MVV. MVV scored three goals in the match and defended their side well, leaving the opposition goalless. The match ended in a win for Almere with 0-3 FT score.

Excelsior has played well in their recent matches. The team is currently unbeaten in the last seven of their matches. Their top performance has put the team in the 3rd position on the league table with 62 points from their matches.

Helmond Sport was the opponents of Excelsior in their last match. Excelsior scored three goals in the match while Helmond Sport scored none. The match ended in a win for Excelsior.

The last four h2h ended with over 2.5 goals.

From the last seven h2h, Almere and Excelsior have won two matches each.

Almere’s home matches have not produced the results the team had hoped for. However, in their recent matches, the team has won in the last two consecutive home matches. Excelsior’s road trips have ended with some good results for the team. They have lost in only two of their last ten away matches.

I believe the match will end in a win for Excelsior, even though they are playing away matches. Both teams have scored over 1.5 goals in their recent matches. So, we can expect the match to end with over 2.5 goals.