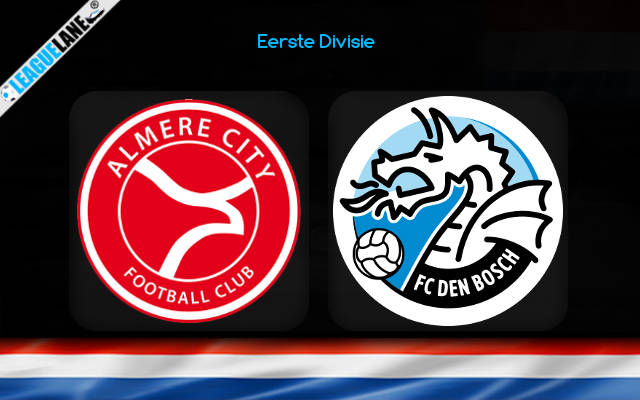 Game week 31 of Eerste Divisie brings us the match between Almere City and Den Bosch on Friday at Almere.

Almere City played their last match against Helmond Sport. Almere scored three goals and defended their side well, leaving the opposition unable to score in the match. The match ended in a win for Almere with 3-0 FT score.

Den Bosch played against Jong PSV in their last match. Even though Jong PSV scored two goals and secured the lead, they couldn’t keep it for long. By the start of the second half, Den Bosch scored an equalizer and in the last minutes, they scored the decider. The match ended with 3-2 FT score.

Almere City has not had the best season so far. The team had played poorly in their matches, with only a few wins from the start. However, they have secured three wins in the last five matches. The team now stays at the bottom half of the league table in the 16th position and has got only 29 points from their matches.

After a long cold streak, Den Bosch has won two consecutive matches recently. From the last te matches, the team has won in two, drawn in one and lost in seven. However, their unbeaten streak in the middle of the season has helped them to stay in the 12th position on the league table with 33 points.

Both teams are in the same position when it comes to their performance. Both teams had a cold streak which has lasted for over seven matches. However, both teams are back in their goal scoring mentality and can be expected to score in this match as well.

Almere City’s last home match has ended the team’s 6-match cold streak. Throughout the season, the team has got only three wins in their home matches. Den Bosch has not won in their last eight away matches. They have failed to score in the last three away matches as well.

Looking at the records, the match is most likely to end in a win for Almere City. Both teams are back in their form and can be expected to score in this match.