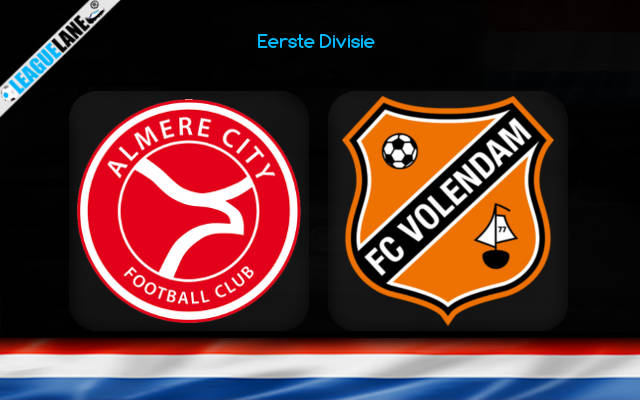 Almere City FC and FC Volendam achieved top half finishes last season. Both teams went on to compete in the playoffs for a chance to get promoted to the Eredivisie only to fail in their quest.

This time around while the latter is pushing for direct promotion, while the former has fallen into the trenches of the second division.

These clubs with contrasting seasons are set to lock horns at Yanmar Stadion this Friday. Read our Preview, Predictions, and Betting Tips with Analysis here.

The Black Sheep has never really been able to perform at the same level they managed to in the preceding season. As a result, the club has managed just 4 wins and a further 5 points through draws this season. With 5 points in their last 5 fixtures, they are 17th in the league.

Volendam was winless in their first 3 league matches. The team has since dropped just 4 points through draws. With 11 points in their last 5 games the club is on top of the table, a point ahead of Excelsior.

The visitors will head into the fixture undefeated on the road this season. They should not have much trouble getting the win against a side that has lost 5 of their last 6 fixtures at home.

Robert Mühren is the league’s second highest goal scorer. The 32-year old has scored 18 goals in 19 fixtures this season. I have backed the Dutchman to find the back of the net this Friday.