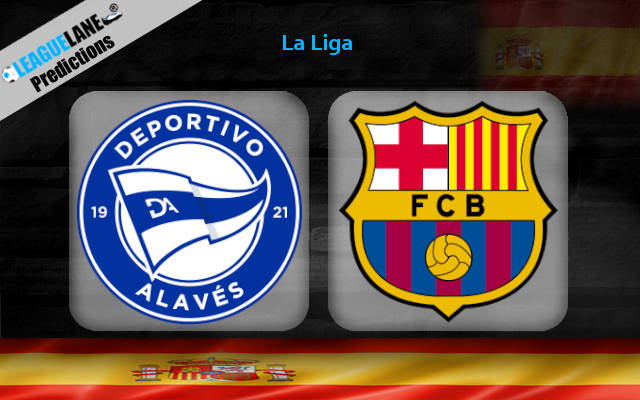 Alaves had two recent wins in their schedule that came within their last three fixtures. These victories were their only wins in the league so far this season. Babazorros has picked up 7 points from their 7 clashes in the schedule. They will host on the back of a 0-2 win on the road against Real Valladolid last time out in the campaign.

Things are not looking bright for Koeman and his team in La Liga this term. Barcelona will travel to Estadio Mendizorrotza with a three-game winless streak in the schedule. With 2 wins and 2 losses in their 5 appearances until now, Barca has exhibited a mixed form. They will visit after a 0-2 loss to Real Madrid in the El Clasico held at Camp Nou.

Alaves has only 2 wins in their 7 appearances so far this season in La Liga. They have conceded 8 goals in the same period while slotting in just 5 goals in return. This shows a shaky defense for the home team in the middle. Besides, their squad strength is comparably lower than the Catalans.

It has been a rough run for Barcelona since they lost the title to Real Madrid last season. The visitor has been winless for the past three fixtures in their schedule, including an El Clasico loss at home. However, Messi and Co. have won their UCL clash with Juventus last time out.

Since they have won both their UCL matches in the schedule this term, Barca can hope to make a comeback in La Liga by building on those wins. The unrest at the camp will also fade with the resignation of Bartomeu recently.

Having scored in their last fixture in the schedule, we can expect Messi to rise to form for the Catalans in the upcoming clash on Saturday. So, expect nothing less of a high-scoring affair in the encounter when the visitors come in after a clean sheet win.

Furthermore, there have been talks in the form of Barcelona outside Camp Nou. But having lost only one of their last five outings, Barca has a decent form on the road.

Especially when they are facing a weaker side in the mix, they are likely to create more chances in the game. The away win in full-time will probably be the best bet for the punters to yield decent returns.