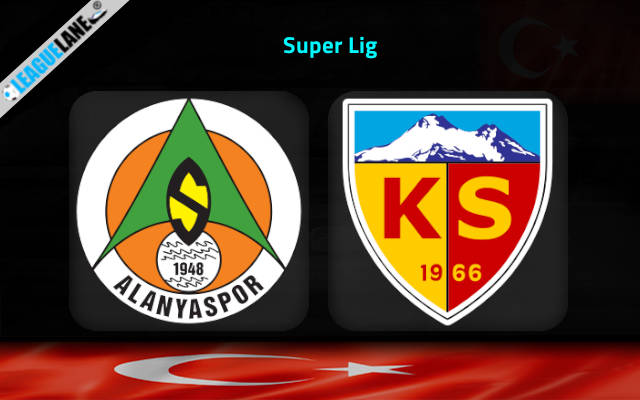 Alanyaspor vs Kayserispor Predictions and Free Tips from our expert tipsters when the teams go head-to-head in Super Lig on Wednesday, 28 December 2022.

Kayserispor advanced to the next round of the Turkish Cup as they defeated Genclerbirligi by 2-0. They are yet to play a league game this month. Therefore, they have to be well prepared.

On the other hand, Alanyaspor managed to hold Konyaspor in a 2-2 draw recently. They have made good improvement in their home form this month. Both teams are separated by four points ahead of this fixture.

The host are on a two-game winning streak against this team. The last time Kayserispor won this fixture was over five years ago.

The host are also on a four-game winning run at Bahçeşehir Okulları Stadium against this team as well.

Who will win the match between Alanyaspor and Kayserispor?

Alanyaspor will most likely win this fixture. The past record shows that they have dominated this fixture at this ground. Moreover, the visitors are yet to play in a league game this month. They lost to Konyaspor in the league last time.

The host have scored more than three goals in three of their last four wins at this ground. The last meeting at Bahçeşehir Okulları Stadium ended with a 6-3 scoreline. This fixture is a high-scoring one at this ground.

The first tip for this game is that Alanyaspor will win this game – 2.05. They have won every fixture since 2018 at their home ground. Moreover, they have won this fixture back in March as well.

Furthermore, our second tip is that Over 4.5 goals will be scored – the odd for this tip will be at 5.00. Three of the last five matches at Bahçeşehir Okulları Stadium ended with a minimum of five goals being scored in total.