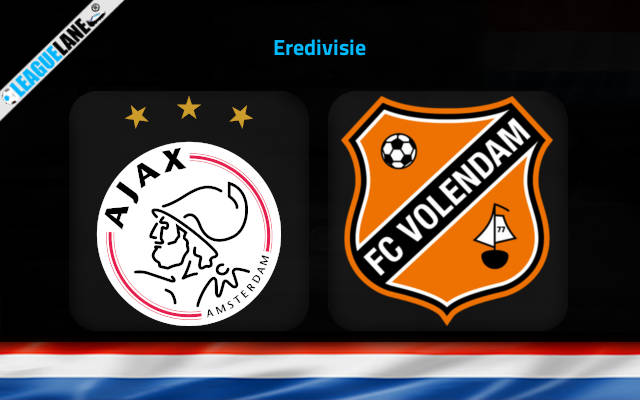 Ajax vs FC Volendam Predictions and Free Tips from our expert tipsters when the teams go head-to-head in Eredivisie on Thursday, 26 January 2023.

Ajax supporters were disappointed last time as they held league leaders Feyenoord to a draw. They are slowly moving away from the title race as they are on a five-game winless run. Now they have a good opportunity to end this streak as they will face Volendam.

Volendam picked up two crucial wins at the beginning of this month. However, their two-game winning streak came to an end as they lost to Excelsior by 2-0. They have won only three games till now.

The last time the visitors won this fixture was nearly three decades ago. At this ground, Volendam are yet to win a game. Both teams last clashed back in October and the game ended with a 4-2 scoreline.

Who will win the match between Ajax and FC Volendam?

Ajax will likely win this fixture with ease, they are fifth in the league and have an excellent winning record against Volendam in the last three decades. At the same time, the visitors have an abysmal form away from home. Do note that they are in the relegation zone.

The October fixture ended with a combined total of six goals. At least three goals have been scored combined in the last four head-to-head matches. We can expect the same to continue.

Both teams have scored consistently in the last five head-to-head meetings at this ground. Just recently Volendam scored two goals against Waalwijk.

The host are unbeaten since November. Moreover, they won almost all the matches against Volendam at this ground in the last twenty years. Not to mention that the visitors are fighting a relegation battle, they have performed poorly against top teams this season. Therefore, the first tip is that Ajax will win this game and BTTS– the odd for this tip will be at 2.10 odd.

Moving on, our second tip for this game is that Davy Klassen will score anytime– at 3.10. He recently scored a crucial goal against league leaders Feyenoord. Against NEC, he scored the opener. His goals have helped Ajax earn two points from their last two league outings.