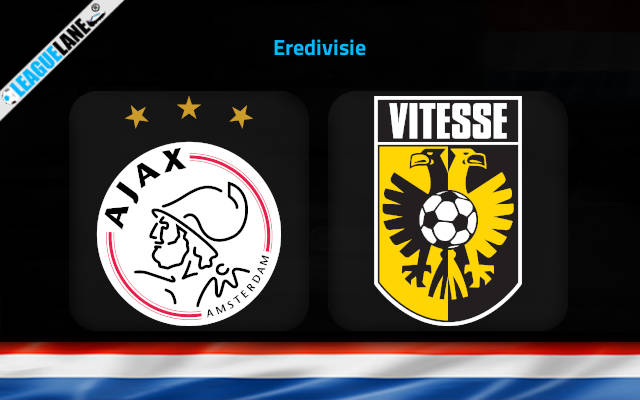 Ajax lost their second game of the season against one of the best teams in the Eredivisie this season. They will now prepare for an important game at Johan Cruijff Arena where they will host Vitesse.

A 2-1 loss against PSV momentarily took Ajax to the second position on the table. Lorenzo Lucca pulled one back in the 83rd minute of the game for Alfred Schreuder’s side. Moreover, this result ended their three-game winning streak.

The visitors picked up six crucial points towards the end of October. This helped them leave the relegation zone. However, in their most recent outing they fell to Sparta Rotterdam by 4-0.

Vitesse’s defence completely collapsed in the last thirty minutes of the game as all the goals were scored after the 60th minute. Goalkeeper Nick Olij played gave one of his best performances of the season as he stopped all five shots on target from Phillip Cocu’s side.

They have lost nearly 60% of their matches this season. If this trend continues, they will most likely be relegated from the top flight.

They are also out of the KNVB-Cup competition. Manager Phillip Cocu is now desperate for a win however he will most likely play a defensive game at Johan Cruijff Arena.

The host have the best chance ahead of them to claim all three points and to move on from their 2-1 defeat against PSV.

You can back the following, as our first tip for this game is that Ajax will score over 3.5 goals – the odd for this tip will be at 2.00 odd. The host have scored at least four goals in three of their last five head-to-head matches at Johan Cruijff Arena.

Furthermore, our next tip for this game is that Ajax will keep a clean sheet – at 1.83 odd. The main reason behind this tip is that the host have not only won by a huge margin but also they have kept two consecutive clean sheets against this side.