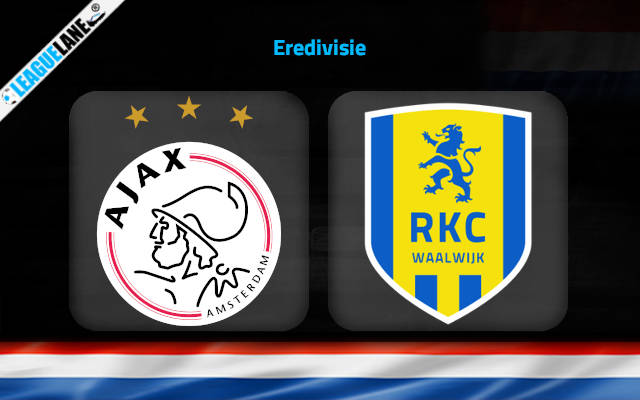 Ajax are in the midst of a wonderful run of games and are cruising towards their 3rd consecutive Eredivisie title. With that being said, they had dropped the same number of points in their last nine league games, as they had in the first fifteen league fixtures of this season.

They met with a significant blow in their most recent league match which came against Go Ahead Eagles away from home, as the contest ended 2-1 in favour of the hosts.

However, prior to that loss at Deventer, the club went on a seven match winning streak. Following which they are now two points clear of PSV on top of the Dutch elite division.

RKC Waalwijk despite going through a run of convincing games often this season, they have followed it up with even more disappointing results. As a result, the club is in constant threat of relegation.

They suffered a cruel loss at home in their previous league games as they conceded a last minute winner, to lose the contest 1-2. The result marked the clubs’ 3rd loss in four league matches.

Being able to pick just a point from those games, the club currently sits 14th in the division, four points clear of the 16th place team.

The away side have registered just one win in the league away from home since November 2020. I do not see them coming anywhere close to beating an Ajax side, that has dropped just eight points at home this season.

Furthermore, they have registered clean sheets in all of their wins at home in the league this season. Hence, expect to register a clean sheet and a win.

Four of the previous seven league matches at the Johan Cruyff Arena, have ended 5-0 in favour of Ajax. Considering the odds involved it is not a bad idea to back the outcome for this Sunday.