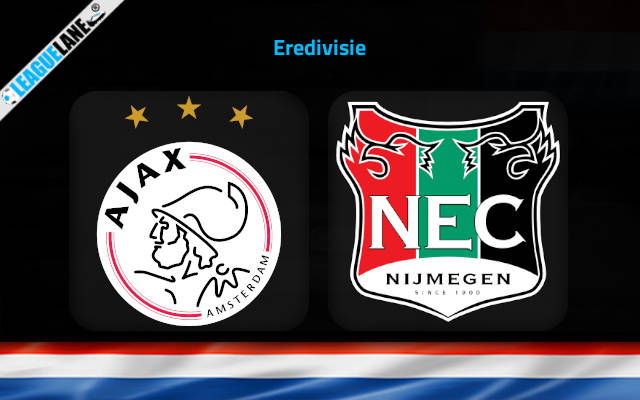 The reigning champions of Netherlands Eredivisie suffered defeat in the last Dutch Super Cup fixture in their schedule. Ajax will lock horns with NEC Nijmegen in the opening match of the league this 2021/22 season on Saturday at Johan Cruijff Arena.

The host had lost only two of their 34 appearances in the league last season and had a 16-point difference with the next of kin on the table. They are on a five-game winning streak in the campaign, following a 1-3 win on the road against the likes of Vitesse last time out in Eredivisie.

In the meantime, Nijmegen had finished seventh in the Eerste Divisie last season for promotion. The visitor had won their last four games in a row including the clashes in the Eredivisie promotion group. They will visit on the back of a 1-2 win on the road against Breda last time out in the relegation playoffs.

There is no doubt that the match is sizing to be a home win in ninety minutes. The odds for the Ajax win is too low to yield any decent returns. But the bookies have been kind enough to keep the tip for half-time and full-time win for Ajax at 1.40 odds.

Furthermore, the reigning champions will aim to start their season on a bright note this term. With their ground advantage, the host is not likely to concede in the ninety minutes. So, the tip for no BTTS will probably be a suitable option for the punters.