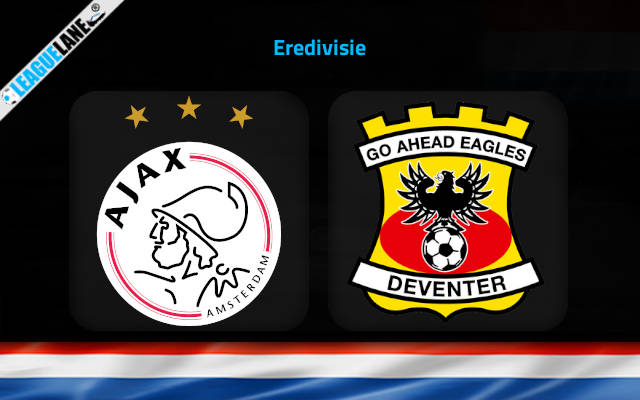 So far Ajax have been best team in the Dutch top flight this season, along with their arch-rivals PSV. At the same time, the Go Ahead Eagles are part of the bottom-most tier in the table, and seldom have they won at all this campaign.

They are placed 13th in a table of 18, and they have a 100% losing record barring two matches. They let in goals in plenty all through this run, and especially so on the road.

In fact, they have a 100% losing record away from home barring a single game, and they also let in two or more goals in all but one of their road trips.

Meanwhile, Ajax have a 100% winning record till now, disregarding a single fixture. They conceded the least number of goals of all the teams in the league, and they scored the second-most number of goals as well.

And most importantly, they have a dominant h2h record against this venue over the years.

For all these reasons, expect a win for Ajax this Saturday.

On the other hand, the Eagles lost five of their former eight overall fixtures, and they also let in two or more goals in five of their past eight match-ups.

Do also note that they were winless in seven of their preceding ten road trips.

Considering these observations, as well as past h2h clashes, expect a win for Ajax this weekend.

Tips for Ajax vs Go Ahead Eagles