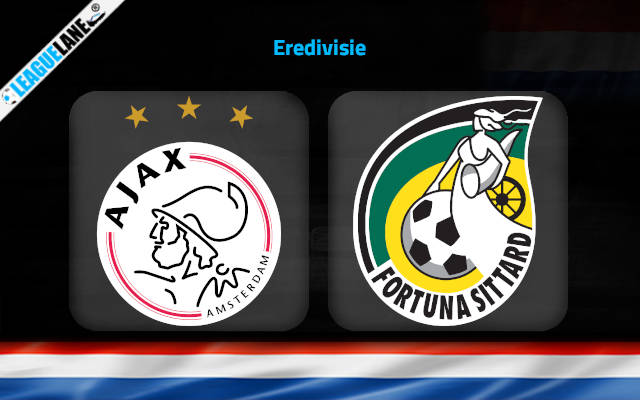 With 26 points in the difference, Fortuna Sittard is at the third last position on the table in the zone for relegation. The current champions are in the zone for Champions League qualification spot and seeks to extend their lead as they invite the Fortuna squad to Johan Cruijff Arena this Wednesday.

The defending champions reside at the 2nd spot on the table with 39 points. They have lost only twice in the league with 3 draws and 12 wins this season so far. This squad has the most impeccable record in keeping the goals to conceding ratio on the table with netting a total of 51 while allowing only 4 since the past 17 league games.

After losing to Alkmaar by 2-1, Ajax began chasing their league season back on track as they picked up a 2-0 away win over Feyenoord the past Sunday.

Sittard is at the 16th spot on the standing with only 13 points from 17 matches. They won only thrice in the league while drawing on 4 and losing on 10 other occasions. They have scored 19 in total while conceding an amassed sum of 41, so far in the league.

Fortuna Sittard have been scored against in 5 of their last 6 matches, letting opponents get 15 goals in total. They gained a hard-fought point against FC Utrecht over the weekend courtesy of a 2-2 draw.

The Dutch giants hold the best attacking and defensive record in the league by a distance which further leads to the fact that not losing a league tie with Fortuna Sittard in their previous 10 games.

Considering the past h2h fixtures and excellent home run, it is easy to predict that the hosts will emerge out victorious this Wednesday. The only challenge is for the visitors who are put forth a stern test to the league’s fiercest attack.