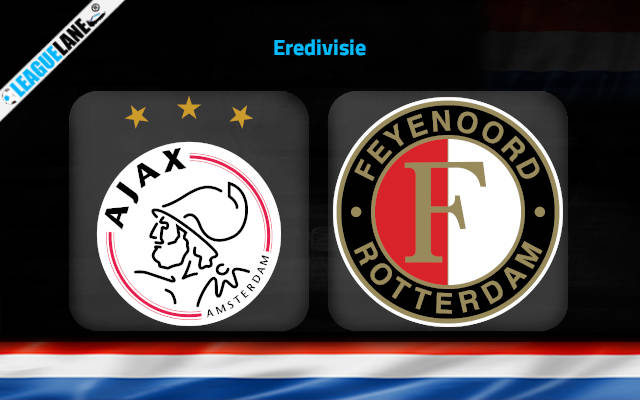 AFC Ajax have not been beaten at half time in their last 16 straight home matches in the league. They are on back to back league wins while having been recently eliminated from the Champions League.

Feyenoord is in the Europa Conference League qualifier spot and are unbeaten since the last 2 league fixtures. They have been on close quarters with AZ, as they lack only by 4 points from The Club on the Meuse.

With 8 points and a single place apart, Ajax will be hosting the visitors this Sunday at Johan Cruijff Arena hoping to extend their lead in Eredivisie.

Ajax is at top flight in Eredivisie with 63 points from 26 games. They won 20 times in the league while drawing and losing thrice each. They have scored 77 goals in total while conceding a sum of only 11 which is jaw dropping stat of its own as they have the best attacking and defensive lineup in the league.

The hosts recently got knocked out in the Round of 16 of the Champions League by 3-2 in the hands of Benfica. They however, won their last league fixture against Cambuur by 3-2 and has reached the finals of KNVB Beker which is scheduled for next month against PSV.

On the contrary, Feyenoord resides at the 3rd position on the table with 55 points. Of the 26 matches played, they won 17 games while drawing on 4 and losing on 5 other occasions.

The visitors will go into the clash after a 1-2 Eredivisie win to beat FC Zwolle in their last outing. They have fired 14 times in the prior six matches in which Feyenoord have taken to the pitch, yielding a mean average of 3.5 goals per fixture.

Considering the past h2h stats and, their current league dominance, we predict a home win this Sunday. Moreover, Ajax are leading the table in terms of home performance, winning 76% of the games played this season at Johan Cruijff Arena.